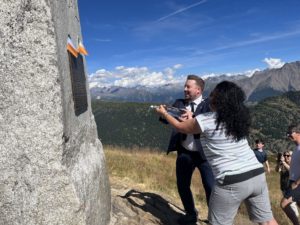 CRITICISM of the council spending €10,000 on a recent trip to Switzerland was described as insular and Trump-esque.

People Before Profit’s Adrienne Wallace said she was “shocked and horrified” at the amount spent when 11 representatives from Carlow attended the unveiling of a plaque to internationally renowned scientist John Tyndall in Belalp, Switzerland last month.

The People Before Profit councillor said €10,568 had been spent on the trip.

“Eleven representatives went over to unveil a plaque. This is nothing short of a waste of money. I cannot see how it was justified. Taxis, flights and meals, what a luxury. Most people cannot afford to send their children back to school without going into debt and this is how you chose spend money.”

Cllr Wallace made the comments after cathaoirelach Brian O’Donoghue had given a detailed report of the trip at September’s meeting of the council. Cllr O’Donoghue said it was hoped that a Swiss delegation will come to Carlow, possibly around the unveiling of a plaque in Leighlinbridge related to Tyndall. The trip also explored possible future connections between SETU and a Swiss institution.

Cllr Wallace said she had spoken to a Laois councillor who informed her that councillors had gone on only one foreign trip, to New York, this year.

Cllr Wallace said Carlow councillors would travel to six foreign destinations this year, including Croatia, Rome, Greece, the US and Switzerland.

“It’s absolutely scandalous. It seems this council is ‘let them eat cake.’ I cannot stand over it.”

Cllr O’Donoghue responded that he believed a delegation of 30 Swiss would return to Carlow to spend their taxpayers’ money locally.

“There is absolutely no suggestion that these trips wouldn’t be made if there was not deep links with these places,” he said.

Cllr Andrea Dalton said cllr Wallace’s statements were misleading. Cllr Dalton said many of the trips mentioned were part of a European study programme and claimed there was no expense to the council.

“When we are successful in this (securing funding), it’s thrown back in our faces,” she said.

Cllr Phelan said there were important EU projects the council was involved in like Crafthub, which supports local crafters, and Urbacht, an urban garden project.

“Carlow is leading the way to get European funding into this council,” he said.

“Cllr Wallace’s view is an insular one. That we can go it alone. It’s Trump-esque, do it ourselves. That doesn’t help anyone. We have to be outward looking.”

Cllr Ken Murnane said cllr Wallace needed to look at the benefits of these trips.

“The rest of us can see it, why can’t you. Take the blinkers off.”

Cllr John McDonald pointed out that cllr Wallace had previously requested reports of these trips, which had now been done.

Speaking of those who had represented Carlow abroad, cllr McDonald said: “You are selling Carlow, keep it up.”