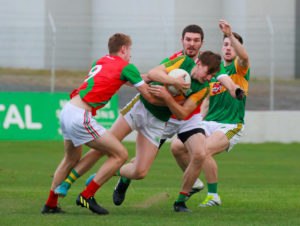 Rathvilly’s Conor O’Neill and Josh Moore and Palatine’s Conor Lawlor and Finbarr Kavanagh during the clash between the two teams in the group stages
Photo: michaelorourkephotography.ie

Despite beating a desperately poor Éire Óg side  by only four points at the weekend, it would be a brave man who would bet against the champions retaining their title. They are not firing on all cylinders but what doesn’t kill you can only make you stronger.

“We re-jigged things around a little bit. With the games we didn’t win, the experience those young lads are after getting will stand to them and it showed today,” pointed out manager, Pat Ryan afterwards.

“We are learning away. We are looking at traits and characteristics of these lads and they only way you will know is by putting them into the championship. Some have done really well and have made a claim for the rest of the championship,” he continued.

Palatine also mixed the good with the bad so far this season. They beat Rathvilly already in the group stages but that will only count for so much now. The champions defence can expect a sharper and faster Palatine attack than they came up against in Éire Óg. Ciaran Moran playing well really lifts Palatine. Despite Palatine’s progress this season, it is hard to see them record a repeat victory over the 2021 champions.

Paul O’Brien the Rangers manager was refreshingly honest on Sunday. He said afterwards that Rangers side were the better side and should have won by more.  Before they beat Bagenalstown Gaels on Sunday and before the draw was made on Sunday neither the two table toppers, Palatine nor Tinryland wanted to meet them. Now that the deed is done, it is down to semi-final business.

“We are through today and there are four championship contenders. There is no team in it now who doesn’t think they can win it. That is the reality,” said O’Brien.

“We haven’t come up against Tinryland. We don’t know a lot about them but we know they are going fierce well at the moment,” he acknowledged.

It is hard to know what to make of Tinryland. It has to be acknowledged they came out of the group with a 100% record. They took on Éire Óg at their own slow and methodical passing game and beat them. Now they are up against a side who played a more traditional type of football. Rangers can still slow a game down too but they vary their approach and quick ball from the half-back line into Chris Nolan, Ted Joyce and Donagh Murphy reaped its rewards against Bagenalstown Gaels.

Tinryland beat the Gaels in the group stages. It was a tight affair. Diarmaid Walshe’s six points were needed on the day. Shane Redmond, Niall Lowry and Danny Moran might not get the same amount of freedom which has been afforded them so far in the championship.

The Borris side have the physicality which could count for much.

In their quarter-final win over St Patricks, players in the Kildavin-Clonegal forward line including Owen Roberts, Joe Roberts and Daryl Roberts all featured on the scoreboards in both halves and this was the trigger for them to achieve the victory.

Fenagh are possessed with quality forwards such as Jack Treacy, Michael Murphy, Sean Smithers and new man, Patrick Pilkington. They will face a massive physical presence from the opposition here and Sean Murphy, Jamie Wall and Padraig Hynes will have to embrace the challenge and impose themselves.

Many of the Kildavin-Clonegal players hold bitter memories of intermediate final defeats in recent years. Fenagh, for their part, need to throw off the mantle of having potential and go on and realise that potential. There is a fascinating encounter in store. Fenagh’s scoring ability could swing it.

The one thing about this match is that Naomh Eoin supporters coming to the grounds on Sunday can be confident the young lads in the side will die on their swords whether they win or lose. Proof of that was their performance against another strong physical side against Grange last weekend.

If Kilbride are to win, they have to physically dominate the young players in the Myshall side and if they do that they have to turn it into scores. The first part is probably easier for them to do than the second where a lot depends on Darragh Foley and Paraic Nolan.

It might be a year too soon for Naomh Eoin where John Michael Nolan, Ross Smithers, Philip Smithers and Jack Kavanagh need to show leadership and they  have to be a lot more effective than they have been in the group matches and in the quarter-final.

Their Old Leighlin opposition may not have been up to much in their quarter-final  but leaving out the experienced Packy and Val Fleming, the All-Blacks have a wonderful strand of youth in their side and were more than convincing last time out. They are here totally on merit. Ballon were even more ruthless against Old Leighlin depriving them of a score of any description. Peter Zerafa, Liam Brennan and Ryan Hollick will lead the Ballon challenge in what will be a close contest.