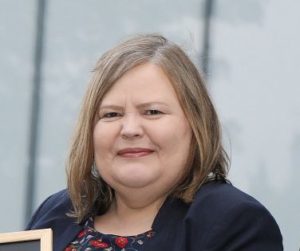 RETIRING council boss Kathleen Holohan has ‘sown the seeds’ for a great future in Carlow. This was one of many tributes to the chief executive of Carlow Co Council at her last meeting of the council last week.

The Carlow woman had spearheaded many projects during her seven years in the role, including Carlow town regeneration master plan that would bear fruit in the coming years.

“She has sown the seeds for what will be a very successful future for Carlow,” said director of services Michael Rainey.

Cathoirleach Brian O’Donoghue said: “You are always on top of your brief, you are an absolute beacon of duty and dignity.”

Tributes from a dozen speakers referred to her ability to seeing what was coming down the line from central government and ensuring the council was prepared to act to progress projects. Her listening ear and wise, supportive advice to cathaoirligh, new councillors and council staff was also highlighted.

Ms Holohan said she never expected to finish her career in Carlow after first leaving to work in Dublin in 1974.

“It has been a great privilege to me to be chief executive for the past seven years. While we may not have agreed on everything, which is to be expected, I have always found councillors to be very supportive of the efforts staff and management took to develop Carlow.”

Ms Holohan lauded the great co-operation of various groups and agencies, statutory, voluntary, business and sports in Carlow. This collaboration has seen the county through difficulty, particularly through the covid pandemic and the Ukraine crisis.

Ms Holohan added: “The reality here is the community groups in Carlow were out before anyone asked them, it was a really impressive response.”

Special word was given to her family who had supported her through a period of illness early in her tenure as chief executive.

“I cannot thank them enough,” she said.

Cllr O’Donoghue concluded: “We can only hope we get someone who is committed and able to make the difficult decisions that came your way. Please, don’t be a stranger.”