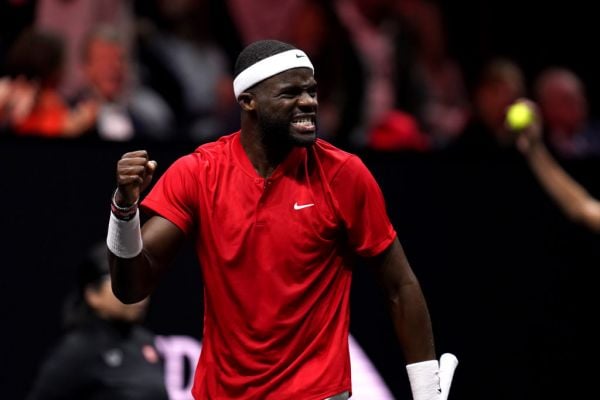 Frances Tiafoe proved the pantomime villain for a second time at the Laver Cup after his epic comeback downed Stefanos Tsitsipas and denied Roger Federer one final trophy before retirement.

A 1-6 7-6 (11) 10-8 victory for the US Open semi-finalist in the 11th match of the Ryder Cup-style team competition helped Team World taste success in the tournament at the fifth time of asking.

Tiafoe’s remarkable win saw John McEnroe’s group hit the magic 13-point mark first on a dramatic and thrilling Sunday at the O2 where they claimed a maiden Laver Cup by a 13-8 scoreline.

It was American Tiafoe who teamed up with Jack Sock on Friday night to beat Federer and Rafael Nadal in an emotional doubles contest which brought the curtain down on the Swiss’ glittering career.

Going into the third and final day of the competition, Federer still had hopes of adding one more title to his illustrious CV with Team Europe leading 8-4.

Felix Auger-Aliassime had other ideas for Team World with success over Andy Murray and Matteo Berrettini in the doubles alongside Sock and followed that up with an even better display in the second match.

Auger-Aliassime stunned Novak Djokovic 6-3 7-6 (3) to claw Team World back from the brink to being one triumph away from silverware.

It was over to Tiafoe to complete the job but he lost the first set in 21 minutes to a locked-in Tsitsipas.

The Greek could not maintain his charge though and after a marathon tie-breaker for the second set that lasted as long as the opener, it meant a decider was required.

During the 10-point tie-breaker, Tiafoe held his nerve and produced clutch tennis, somehow making a sensational drop shot despite starting behind the baseline and finally getting over the line to help Team World make history.

A stunned Tiafoe reflected on-court: “Unbelievable, unbelievable feeling. Our captain Jonny Mac was tired of losing. I kept saying all week that this is our year. Guys showed up. Felix beat Novak, Jack and Felix also played unbelievable doubles and it wasn’t just me.

“We all showed up. I just kept going and this is big. We’ll celebrate big tonight.

“It looks like I have that clutch game right now, I don’t know. I feel like a kid out here, just competing and playing the game I love. I am just happy I get to hold the Laver Cup trophy today, that’s all that mattered.”

McEnroe had made the bold call to play Auger-Aliassime in back-to-back ties at the start of Sunday but it paid off handsomely with the world number 13 in imperious form.

Murray and Berrettini initially got off to a flyer in their doubles contest but it was the lightening quick reflexes of Auger-Aliassime at the net which saw the tide turn and alongside partner Sock they triumphed 2-6 6-3 10-8.

It guaranteed the O2 crowd, and Federer, at least two more matches in the London arena before the Laver Cup came to its conclusion.

With Djokovic standing in the way of Auger-Aliassime, after a 95-minute doubles contest beforehand, it looked a tall order for the 22-year-old to find a maiden win over the Wimbledon champion.

An early break for the Serbian added further weight but the Team World player was able to pick up where he left off against Murray and Berrettini with a mixture of big serves and exceptional groundstrokes stunning Djokovic.

Auger-Aliassime’s victory represented his first against any of the big three and he was understandably delighted.

He admitted: “It felt great, for sure. You know, one of my best wins so far in my career. To back it up after the doubles, it was super important.”

“Felix is a strong young man, so we weren’t worried about him playing back-to-back,” McEnroe insisted.

“In retrospect we look like geniuses because he played so well to win the doubles and singles, but you have to go out there and get it done.

“We had a great full-team discussion last night about what our options were, At the end, we all agreed that was our best option.”

It set it up for Tiafoe to be the hero and in true showman fashion, the American dug deep to save four match points against Tsitsipas and create history for Team World.