THE intermediate football final promises to be a fascinating contest with two teams who both feel they have underachieved over the last number of years. In 2021, both were beaten by the eventual winners, Éire Óg, and now they are out to make amends.

Chairman of the Fenagh club, David Hickey, was jubilant after he watched his club come through a battle against Kildavin-Clonegal last Saturday.

“This was a tough game. A hard game. Intermediate football at its best. A game like that will improve our lads,” he pointed out.

“We are delighted. 2013 is the last time we have been there at intermediate. That year we won but in the restructure of the championship in Carlow at the time, we didn’t get a chance to go back senior,” Hickey recalled.

“This is the first time we have played in Netwatch Cullen Park this year. Where other teams are after having 3-4 games here, we are coming into the county grounds for the first time. That can take a little bit out of you as well,” the wily club officer suggested. 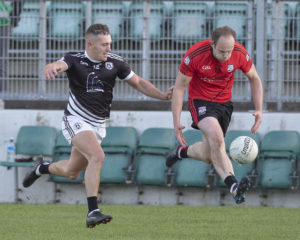 Fenagh’s Michael Murphy solos through the air to evade the challenge of Kildavin/Clonegal’s Pauric Hickey during their semi-final clash
Photo: Thomas Nolan Photography

Mick Byrne, the Naomh Eoin manager, has trained teams like Kilbride to win an intermediate title. In that same year, he made his own  bit of history when he coached Asca to win a junior championship. He has been around as he points out himself.

“I know a lot about Fenagh. They gave us a good trimming in the group stages. They will be very good. They will be the team to beat. We have no injury worries. We will reassess on Tuesday. Everything is good,” he stated.

And where has the improvement been coming on since the final last year when they never turned up against Éire Óg?

“Youth is the secret and we have lots of that. Maybe we are lacking in experience but youth overcomes that,” he said. 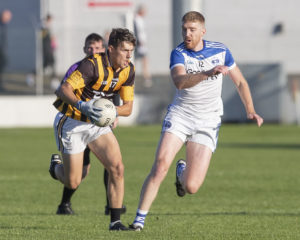 This will be a final that will be on a knife-edge. In Jack Treacy, Michael Murphy, Colin Byrne and the Bradley brothers, Fenagh have been producing quality young players for years now. They haven’t been getting over the finishing line as often as they would have liked.

Picking a winner here is difficult. A bounce of a ball could decide it. Yet it is hard to look beyond the 5-16 Naomh Eoin put up against Kilbride in the semi-final.