WHILE by the far the most important honour on Sunday will who lifts the Nationalist Cup at the end of the SFC final, Palatine do already look assured of one title, the top scorer in this year’s Championship. 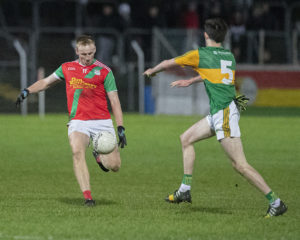 Palatine’s Shane O’Neill looks to have an unassilable lead at the top of the scoring charts in this year’s SFC heading into Sunday’s final
Photo: Thomas Nolan Photography

Shane O’Neill has scored seven points more than anybody else in this year’s Championship and is a massive 12 points ahead of his nearest Tinryland opponent, Diarmaid Walshe, so looks uncatchable at the top of the chart.