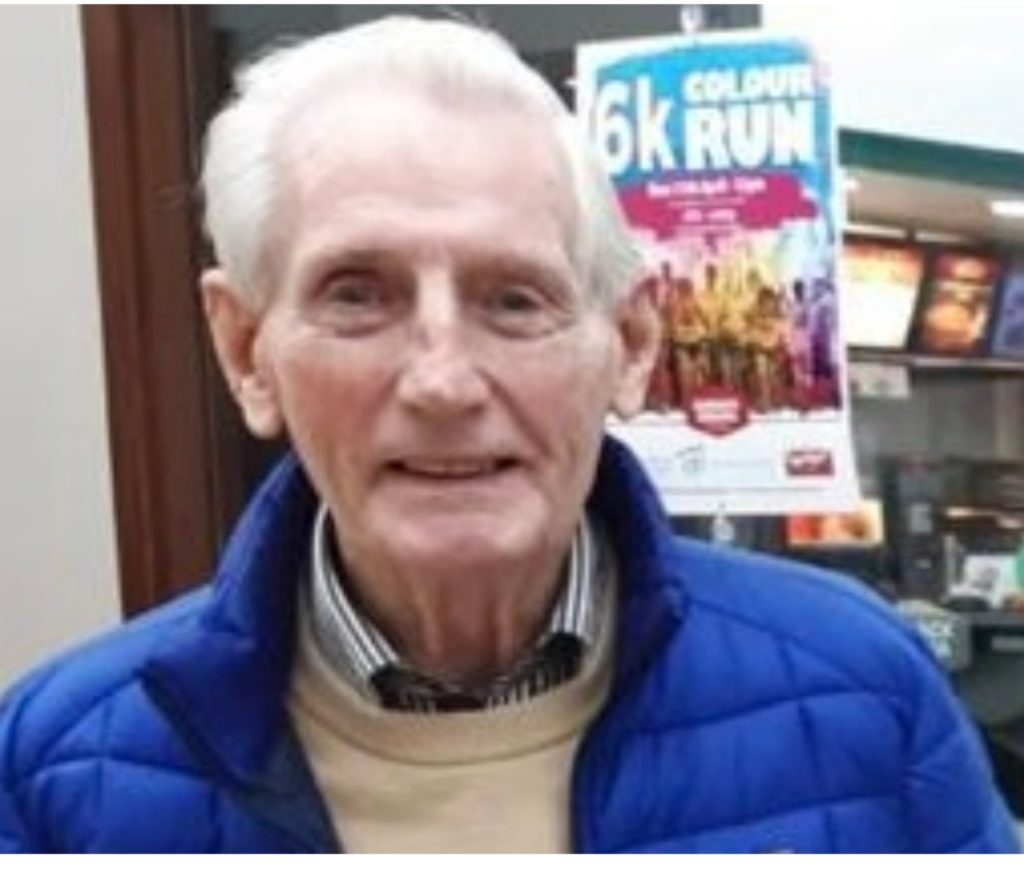 THE family, neighbours, friends and former work colleagues of Michael O’Sullivan, Oak Park Road, Carlow gathered on Sunday 25 September in the Church of the Holy Family, Askea to remember with deep gratitude and affection the life of the Kerry native, who had lived in his adopted Carlow for 58 happy years.

Michael, who would have celebrated his 89th birthday on Monday 19 September, died unexpectedly on Sunday 17 July. His death caused widespread shock and regret.

Michael was a native of Kenmare, Co Kerry.

Born into a farming background, Michael was one of a family of six children – four boys, two girls – being survived by two sisters and a brother.

He was educated in Kenmare National School and at secondary level in St Brendan’s College, Killarney, where he combined his studies with playing Gaelic football. He was good enough to be selected as a Kerry minor (under-18) in 1954, a fact of which he was rightly proud.

During his time in Cork, he met his wife-to-be Geraldine from Co Roscommon. The couple married in Dublin in 1963.

In 1963, Michael had come to live and work in Carlow as production manager with Erin Foods, an arm of the Irish Sugar Company. In 1977, he was appointed personnel manager to Irish Sugar, a post he held until he retired at the end of September 1995.

Michael O’Sullivan was highly regarded throughout his 33 years of employment by Irish Sugar. He was a man of the highest integrity and was extremely popular with everybody at both Erin Foods and the sugar factory on Athy Road.

It is worth remembering that, at its peak at the seasonal sugar beet ‘campaign’ period, up to 1,000 people were employed at the Carlow sugar plant. But Michael’s personality meant he coped admirably, probably knowing the entire staff on first name terms!

On his retirement Michael became actively involved with the Greencore Pensionsers Association and, along with Vincent Grogan, worked to improve their conditions.

Michael was a member of Carlow Golf Club from the time he came to the town, playing the Deerpark course right up to the Tuesday before his death with his neighbour, friend and former work colleague Tony Quinn.

Michael became an avid golfer, who went on to serve as club secretary in Carlow. In retirement he had the time to devote to his love of the game. He was a long-time member of a fourball along with Ted Brophy, Tony Geoghegan and Dermot O’Driscoll. He enjoyed the company and the craic, being very much a people’s person.

In more latter times, as that fourball broke up through advancing years, Michael golfed with Tony Quinn, the late Pat O’Brien – a neighbour and former work colleague, who passed away last July – and Corkonian Michael Roberts. By that time he had the use of a golf buggy, a present from his family to mark Michael’s 80th birthday.

He also greatly enjoyed the outings of the Irish Sugar Company Golf Society.

As a Kerryman, Michael was passionately devoted to the fortunes of the Kingdom footballers. He was a first cousin of the three Spillane brothers from Templenoe – Pat, Tom and Mick – so the family football gene was very strong.

He lived to see Mayo break Dublin’s six-year grip on the Sam Maguire Cup in 2021 before Kerry then fell victim to eventual All-Ireland champions Tyrone. Sadly, Michael passed away an exact week before his county bridged an eight-year gap by capturing the All-Ireland with victory over Galway in Croke Park.

Then there was the long-standing banter he had about Gaelic football with his neighbour, the late Tony Connolly, manager of Carlow sugar factory. Tony was an out-and-out Dub. They both had their good days from the Kerry-Dublin All-Ireland clashes from 1975 onwards.

Michael and Geraldine liked to go to the annual August Racing Festival in Galway, with Punchestown being another favourite horse-racing venue.

Throughout their married life, Michael and Geraldine enjoyed going away on summer holidays, particularly to Gran Canaria in the Canary Islands, often with their good friends Pat and Mary Cantwell. Their last vacation there was in January of this year.

They had travelled to Chicago on a few occasions to visit family members from both sides of the family. Then there were trips to China, the Holy Land and South Africa, Michael’s favourite foreign destination.

Back in 1963, Michael joined the St Vincent de Paul Society. He had been active in the society in Cork, having spent a year in the local conference in the Munster capital.

Michael O’Sullivan, who was one of the oldest members of the St Vincent de Paul in Carlow, was always interested in people and sympathetic to people in bad circumstances.

As a man of the soil, Michael was owner of a small farm. He kept drystock cattle and greatly enjoyed carrying on an aspect of farming life, in unison with his work at Irish Sugar.

In retirement, Michael enjoyed calling on his neighbours for a chat, while on Sunday nights he would ring his brother Teddy in Killarney to discuss the day’s GAA outcomes, while also ringing his nephew Donal O’Sullivan to find out about the Kenmare GAA scene.

Michael was devoted to his family, his wife Geraldine and his three daughters. As a father, his daughters spoke of how, up to the very end, he supported them in every aspect of their lives and how much he will be missed. “We could not have asked for a better dad” they said.

The funeral Mass for Michael O’Sullivan was celebrated in the Cathedral of the Assumption on Wednesday morning, when Fr Dillon was celebrant, assisted by Michael’s nephew Fr Pat O’Byrne, a Columban Father ministering in London, and Mgr Brendan Byrne, a neighbour and friend of Michael’s and on whom Michael often called for a chat. Readings at Mass were by Tomás O’Sullivan (nephew) and Barry Kennedy (son-in-law), with Prayers of the Faithful being recited by grandchildren Áine Kennedy, Daniel McGovern, Andrew Kennedy and Hugh McGovern.

The Offertory gifts were brought forward by Michael’s daughters Colette and Rhona.

His daughter Michele gave the eulogy to her dad during Maas.

Burial took place in St Mary’s Cemetery immediately after Mass, with Fr Dillon reciting the final prayers at the graveside.

Michael’s brother Teddy brought some soil from the O’Sullivan home farm in Kerry, which he placed on the coffin, along with the Kerry GAA flag.

May Michael rest in eternal peace.