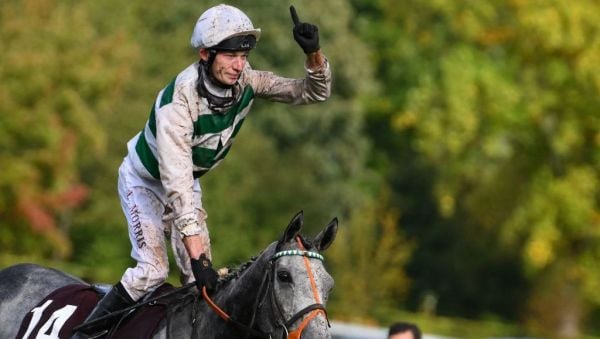 The Kirsten Rausing-owned mare travelled sweetly in the heavy ground and was always well-placed as Japanese hope Titleholder set a good pace.

The five-year-old was last off the bridle as Morris sat chilly and, giving the mare her head approaching the final furlong, Alpinista stayed on stoutly to fend off the late thrust of Eclipse winner Vadeni and last year’s winner Torquator Tasso, who flew late from a wide draw under Frankie Dettori.

Prescott said: “I was wondering whether she could improve again, and she did.

“The race went like a dream. If it hadn’t been my horse, I would have thought it was going to win every inch of the way, but when it’s your own of course it’s a nightmare!

“I didn’t think all that rain would help, but she’s never travelled better and has come on with each race.

“Can she go on again? I don’t know what Ms Rausing will do. There’s the Japan Cup and the Breeders’ Cup to consider, so we’ll see.”

Morris said: “I had a beautiful draw in stall six and after being perfectly placed, there was a second when I thought we were getting drawn into it too early.

“But once she had taken charge, I was able to sit on her from 100 metres out.

“All credit to the staff at home I’m just the guy that sits on the horses a few times each year.

“I was concerned when all that rain came, but the race went very smoothly – I couldn’t believe how it could have in a 20-runner Arc. It was incredible.”

Rausing added: “She will come back to our stud next year. As for the Breeders’ Cup or the Japan Cup, we want to go home and talk about it.”

Georges Rimaud, racing manager to Vadeni’s owner, the Aga Khan, said: “We were very pleased with his run and we were obviously beaten by a very good opponent.

“Christophe (Soumillon) had a good run through the whole race and thought he was going to win, but the mare found more.

“He’s proved he stays the trip in soft ground, so we will go away and discuss what will happen in the next few days.”

Dettori said: “He finished really strong and ran a super race. The draw didn’t help but it’s his style of racing to run on the outer.

“I thought for a moment I might get to them, but they were too strong for me.”

“Obviously he got stuck in the ground, he pulled a muscle off his near-hip. He’s sore enough now,” he told Sky Sports Racing.