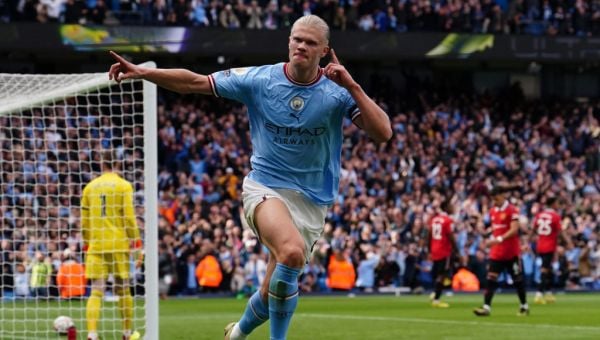 Haaland’s treble, remarkably his third in successive home Premier League games, took his tally since joining the champions in the summer to 17 in just 11 appearances in all competitions.

Foden also had a huge hand in a rampant City display which evoked memories of their famous 6-1 derby demolition of United at Old Trafford in 2011.

Foden began the rout after just eight minutes and United were a distinct second best thereafter, although Antony pulled one back and Anthony Martial also claimed two consolation efforts.

The result, which took City back within a point of the top of the table, both underlined the champions’ brilliance and emphasised the size of the task still facing Erik ten Hag at United.

It was United’s first Premier League outing in almost a month and it showed.

A run of four successive wins had fuelled optimism and the visitors’ hopes were also raised when it emerged key City midfielder Rodri was out injured and the hosts would line up with Manuel Akanji and Nathan Ake in central defence.

What a move by Manchester City 👏 pic.twitter.com/kGWIa7vK4K

Yet any belief they had was comprehensively shattered in a first half completely dominated by a fast and fluid City.

An early indicator of the tone of the opening period came after just two minutes as an exposed Diogo Dalot was booked for a late challenge on a flying Jack Grealish.

Things got almost immediately worse for the visitors as City forced them to clear off the line three times in quick succession. Scott McTominay blocked efforts from Haaland and Bernardo Silva either side of David De Gea saving from Kevin De Bruyne.

A goal seemed inevitable even at this stage and it arrived as Foden swept in his first from a Silva cutback.

Ilkay Gundogan then hit the post from a free-kick after Lisandro Martinez had become the latest to fell Grealish and Tyrell Malacia was also booked for pulling back Foden.

It was remarkable City had to wait until 34 minutes for their second goal after Foden and Gundogan had further efforts blocked and De Bruyne was denied by De Gea.

Raphael Varane was injured in the process of blocking one of those efforts and City took advantage of his absence to claim their second as Haaland powered in a header from a corner.

Varane was back on the field for City’s third but could do nothing as De Bruyne curled a fantastic ball beyond him for Haaland to slide in at the far post.

City’s fourth of a dazzling first-half display came just before the break as Haaland turned provider to tee up Foden’s second from another lightning counter-attack.

United had made only occasional forays into the City half but they did claim a fine consolation after the restart when Antony curled one inside the far post from 25 yards.

Antony pulls one back for Man United with 𝐁𝐑𝐈𝐋𝐋𝐈𝐀𝐍𝐓 strike! 🇧🇷🔴 pic.twitter.com/OuCNpkIi4Z

But normal service was soon resumed as Haaland completed yet another treble just after the hour when he powered in a shot from a Sergio Gomez cross.

Not to be outdone, Foden laid his claim to the match ball when he grabbed his third soon after, timing his run on to a Haaland pass superbly to fire past De Gea. There were VAR checks for offside and the ball having gone out of play in the build-up but the goal was allowed.

United pulled another back when Martial headed in after Ederson had blocked and the same player tucked in an stoppage-time penalty after being fouled by Joao Cancelo.