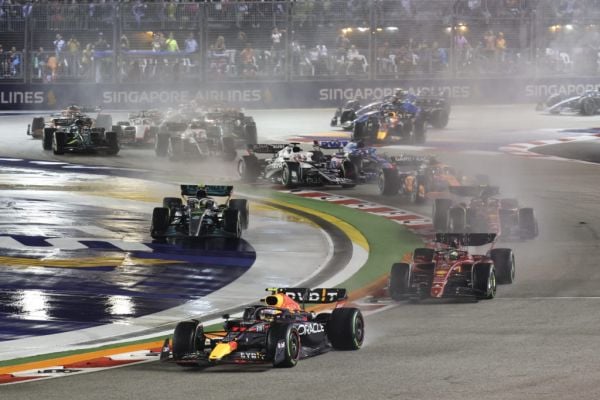 Lewis Hamilton started third but finished a disappointing ninth after he hit the wall, while Verstappen dropped from fifth after a banzai move on Norris backfired.

CHECO: “That was my best performance [in F1]. The last three laps were so intense. I gave everything for the win today” #SingaporeGP #F1 pic.twitter.com/Sq2sl6FiHx

Verstappen heads to next weekend’s Japanese Grand Prix with a 104-point championship lead. He needs to leave Suzuka 112 points clear to take the title and the Dutchman will be crowned champion in Japan if he wins and sets the fastest lap.

Perez’s triumph is subject to an investigation following an alleged infringement behind the safety car. The Mexican took the chequered flag 7.5 seconds ahead of Leclerc.

The start of Sunday’s race under the thousand of bulbs that light up the Marina Bay Circuit was delayed by one hour and five minutes following a huge downpour.

Perez made no mistake when the signal turned to green by beating Leclerc to the opening chicane in the damp conditions.

Hamilton dropped behind Sainz as they duelled at the first chicane, with the former forced to take to the escape road. “I got hit by Sainz,” said Hamilton. “He sent me wide.”

Verstappen, who needed to win here to stand any chance of securing back-to-back titles with five rounds spare, started down the order in eighth after his Red Bull team under-fuelled his machine in qualifying, and dropped to 12th following a poor getaway.

The first safety car was sent out on lap eight when Nicholas Latifi banged wheels with Zhou Guanyu.

Latifi moved across to defend his position but left Zhou with no room. The Chinese driver scraped the wall and broke his front right suspension.

At the restart, Verstappen, who had recovered to ninth, quickly dispatched of Sebastian Vettel and Pierre Gasly to move up to seventh. That became sixth when Fernando Alonso broke down in his Alpine with an engine failure.

Perez was keeping Leclerc at arm’s length, with Hamilton tucked up behind Sainz.

“I am just losing so much time behind this guy,” complained Hamilton. “He is really slow.”

And on lap 33, Hamilton’s night fell apart when he carried too much speed into the seventh corner and whacked the wall. Hamilton slipped his Mercedes into reverse, falling behind Norris, but re-joining ahead of Verstappen.

This is tense 😬 Checo and LEC are pushing hard. Max is up to P11 on his new softs #SingaporeGP 🇸🇬 pic.twitter.com/GA0nrcYeVb

However, Hamilton’s front wing was dangling off his Mercedes, with Verstappen saying it was dangerous.

The seven-time world champion stopped the next time around for repairs but would emerge only in ninth.

With the grid switching from wet tread to slick rubber, Yuki Tsunoda clattered the barrier at Turn 10 and the safety car was sent out for a second time.

The race resumed on lap 40, and Verstappen, so impressive this season, lost his cool by overshooting at Turn 7 with an ambitious move on Norris.

The world champion wrecked his tyres and was forced to stop for a new set of slicks.

Verstappen made five positions from 14th and then Hamilton slid wide at Turn 7 to allow his former rival to sneak through to eighth. In the last seconds, Verstappen then fought his way past Vettel for seventh.

On an night to forget for George Russell, the British driver – involved in collisions with Valtteri Bottas and Mick Schumacher – finished last.

“It was my best performance,” said Perez after taking the fourth win of his career. “I controlled the race.

“The last few laps were so intense. When I got out of the car I felt it. I gave everything for the win today.”

Asked about the safety car infringement, Perez replied: “I have no idea what is going on.”

A disappointed Leclerc added: “The race was difficult. I need a good night’s sleep and to get ready for Japan.”