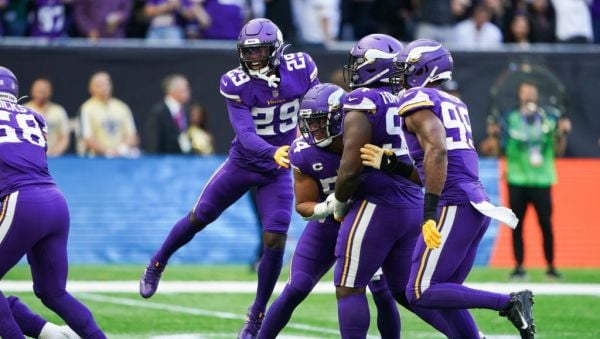 The Minnesota Vikings edged a 28-25 thriller with the New Orleans Saints to open the NFL’s three-game series in London.

The Vikings got on the scoreboard first with a 15-yard Alexander Mattison touchdown on their opening drive while the Saints – the designated hosts at Tottenham Hotspur Stadium – struggled to gain territory in the opening quarter.

But New Orleans battled their way back before pulling ahead for the first time in the fourth quarter thanks to Taysom Hill’s close-range touchdown.

Minnesota rallied though and, with the score having been tied at 25-25 and the clock running down, Greg Joseph kicked the decisive field goal to snatch victory for the Vikings in front of a crowd of 60,639.

As predicted, 34-year-old Andy Dalton stepped in as Saints’ quarterback after regular starter Jameis Winston was ruled out due to an accumulation of injuries that had plagued him over New Orleans’ 1-2 start to the season.

It set up a serendipitous rematch with opposite number Kirk Cousins, who was QB for the now-named Washington Commanders when they drew 27-27 with the Dalton-led Cincinnati Bengals at Wembley in 2016.

New Orleans won the coin toss – overseen by Tottenham captain Harry Kane on his home turf – and elected to defer,  with Cousins soon having to get out of early danger after a second-down incomplete pass.

The Vikings thought they had taken the lead when, having been third and goal at the five-yard line, Cousins launched a pass into the right corner where KJ Osborn took the catch.

However, the touchdown was called off for offensive pass interference and the visitors were handed a 10-yard penalty.

But the 18-play, 74-yard drive still ended with the first touchdown of the day, a scoring run from Mattison which saw Joseph add the extra point.

Dalton’s afternoon got off to a difficult start as the Saints were punished for a false start and picked up another five-yard penalty, gaining just 16 yards before they were forced into a three-and-out.

Defensive tackle Kentavius Street picked up his first sack of the season on the Vikings’ next drive before Za’Darius Smith returned the favour on Dalton to end the second drive for the Saints, who were again forced to punt downfield.

But, with just 16 seconds to go in the first quarter, Tyrann Mathieu intercepted Cousins’ pass in midfield to earn a vital turnover.

And New Orleans levelled things up to start the second quarter thanks to a 13-play, 60-yard drive that ended with Dalton finding Chris Olave in the end zone with a four-yard pass.

The touchdown was initially challenged but the replay official confirmed the pass was completed and the score stood, and Lutz’s boot made it 7-7.

It was Minnesota who held the upper hand at the midway point of the game, though.

Cousins was unable to find Johnny Mundt on the right with the Vikings 10 yards out on third down, but that still set the platform for a field goal attempt for Joseph, who successfully added the three points from 28 yards.

That was a minute before half-time but the Vikings were not finished there either.

Dalvin Tomlinson sacked Dalton at the 19-yard mark and Minnesota took full advantage, their five-play drive ending in a 36-yard field goal from Joseph to send the Vikings into the interval with a six-point advantage.

Minnesota looked to build on that momentum at the start of the third quarter and a costly New Orleans fumble was recovered by the Vikings at the Saints’ 44.

Cousins almost linked up with Joseph Jefferson near the end zone but New Orleans survived and Minnesota had to settle for a 24-yard field goal from Joseph.

Saints then hit back. Wide receiver Marquez Callaway made a brilliant catch near the left sideline to gain 33 yards on second down and the hosts, finally threatening, ended the drive with a one-yard rush from Latavius Murray for their second touchdown.

Joseph extended Minnesota’s lead again with a 46-yard field goal to start the fourth quarter but Saints had found their rhythm at last, gaining 73 yards before Hill put them ahead for the first time, with their lead stretched to 22-19 with a two-point conversion.

The Vikings responded by taking advantage of penalties against their opponents to make it 25-22 through a Jefferson touchdown, although Joseph failed to add the extras for the first time.

That looked like it might prove critical when, moments later, Lutz tied things up with a 60-yard field goal, the second-longest in Saints history.

However, Minnesota gained territory through Cousins’ 39-yard pass to Jefferson and Joseph ended the drive by slotting over his fifth field goal to put the Vikings in front again.

Saints turned back to Lutz for another 61-yard field goal attempt, but he was not able to perform a second miracle, his effort hitting the left upright to hand Minnesota their third win in four games this season.