FOR the seventh time in their history, Palatine are the senior football champions of Carlow after they withheld a strong second half comeback by Tinryland to win 2-8 to 2-6 and lift the Nationalist Cup at Netwatch Cullen Park today. 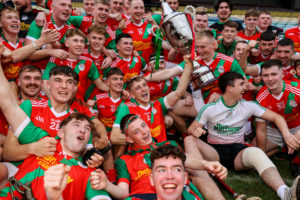 Palatine made a dream start when Jamie Kenny scored a fourth minute goal and they got a second late in the half when Thomas Sheehan converted a penalty after Bryan McMahon had been fouled.

That helped them into a 2-4 to 0-3 lead at half-time and they stretched their lead out to nine with two points after the restart of play. 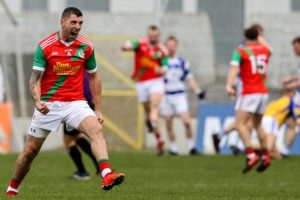 Diarmaid Walshe dragged Tinryland back into the game when his 45 squirmed all the way into the Palatine net, and then he added two points.

Under mounting pressure, Palatine were reduced to 14 men when David Reid was shown a straight red card.

By the time Shane Redmond fisted to the net late in the game, there was just a point between the teams. Paul Broderick had a chance to level the scores but he couldn’t convert a free from a difficult position.

In the end, Conor Crowley pointed a free that he had won himself in injury time to secure a two point win and spark huge celebrations.

Check out Tuesday’s edition of the The Nationalist for a full report, reaction and analysis of this game, and all the weekend’s GAA finals.