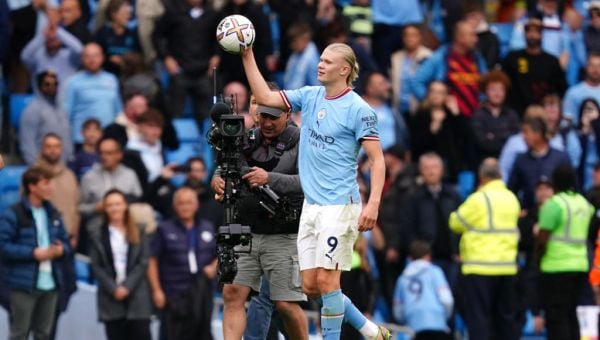 Haaland is the first player ever to score hat-tricks in three successive Premier League home games and shattered the mark for the quickest to reach three trebles in the competition.

Here, the PA news agency takes a look at the Norwegian’s achievements so far and what could be still to come.

Haaland has three hat-tricks in his first eight Premier League appearances, a truly staggering improvement on the previous record.

Before Haaland, the quickest player to a treble-treble was Michael Owen in 48 games – fully six times as many as City’s new superstar.

“He only just beat me!” Owen quipped on the Premier League’s in-house video channel.

Alan Shearer’s record of five hat-tricks in a Premier League season is already well in Haaland’s sights, while former City striker Sergio Aguero holds the record of 12 in total.

Shearer, Aguero, Andy Cole, Dimitar Berbatov and Jermain Defoe share the record of five goals in a game. Haaland has never achieved that in any competition but the 22-year-old’s day could certainly come.

At his current rate of 1.75 goals per appearance he is on track to reach that mark inside 19 games – the midpoint of the season, against Wolves on January 21, should he remain ever-present until then.

He would then hit the Premier League record of 34, set in 42-game seasons by Shearer and Cole, in the following game against Tottenham.

That rate is surely unsustainable even for Haaland and City but the record looks likely at some point barring a long-term injury – and Owen is already looking even further ahead to Shearer’s all-time tally of 260 Premier League goals.

“He’s hundreds away from it but it’s so realistic because of the rate that he’s scoring, the Alan Shearer record has got to be an attainable target already,” the former Liverpool frontman suggested.

It is not just the Premier League where Haaland could break records, and 38 this season would see him match a 94-year-old record for City in all competitions, set by Tommy Johnson in 1928-29.

And with three goals in his first two Champions League appearances for the club and back-to-back group games against Copenhagen to come – if selected – he is in the early stages of threatening a run at Cristiano Ronaldo’s record of 17 in a season.

He has 15 goals along the way – hat-tricks against Crystal Palace, Nottingham Forest and United, two against Sevilla and one each against Newcastle, Aston Villa, Borussia Dortmund and Wolves.

Messi scored 18 in eight Barcelona games in 2012 and had another run of nine games, the longest under Guardiola, in 2010. He scored 15 in that sequence, so Haaland would exceed that mark with a goal next time out.

Aguero, in 2019, and Riyad Mahrez last season had seven-game scoring runs for City under Guardiola.