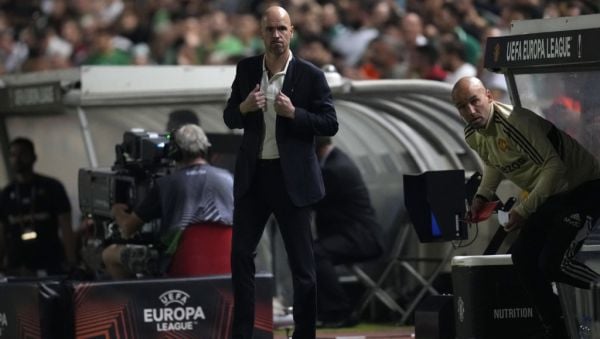 Wounded by Sunday’s 6-3 derby defeat at Manchester City, the Red Devils were stung in Cyprus after making a strong start as the hosts capitalised on lax defending to go ahead through Karim Ansarifard.

Omonia scored after Tyrell Malacia was dispossessed having collected a pass from ineffective Jadon Sancho following a clear free-kick, with Ten Hag replacing them with Luke Shaw and Rashford at half-time.

The latter would go on to score either side of a fine goal by second-half substitute Martial, putting the Group E encounter out of reach despite Omonia replacement Nikolas Panayiotou making it 3-2 late on.

“I think we started well, a couple of chances, and then unnecessarily down,” United boss Ten Hag told BT Sport.

“The mistake cannot happen, we have to take responsibility there. But then a really bad 10 minutes and we have to learn from that.”

Asked what he changed at half-time, the Dutchman said: “A couple of things, especially more runs.

“We were too static and we have to make the opposite movement to get behind. That’s why also we make two subs in that time and they had really an impact.

“I think Luke and Marcus definitely (helped with that) but also Anthony Martial, of course, with 2-1.

“I think the subs really had an impact today and that is really good. That makes the team stronger.”

The victory provided an important three points in United’s quest to reach the Europa League knockout stages, having lost their Group E opener at home to Real Sociedad.

“We have already seen that (he can be important) in pre-season,” Ten Hag said of the France international, who scored two off the bench as he returned from injury in Sunday’s 6-3 loss at City.

“It was really a big disappointment for this team, for me, when he got injured in the last 10 minutes against Atletico Madrid (in the final friendly).

“So, we missed him in the first couple of weeks and that also had an effect on our team performance.”

United lost their opening two matches of the season but were on a four-match winning run in the Premier League before the loss at neighbours City.

Manchester United come back from behind 💪#UEL | @ManUtd pic.twitter.com/pNJlcIyZtc

Now attention turns to an improved performance at Everton on Sunday, when Ten Hag says they need to put things right after the derby humiliation.

“It has to be only a warm-up,” he said of the win in Cyprus. “Sunday, especially there, we have to react.

“We have to give the best performance we have and we have to prepare that now.”

Everton is the third of nine fixtures United are playing in October, with Omonia arriving at Old Trafford next Thursday as boss Neil Lennon looks for another positive performance.

“Listen, we rode our luck a lot of times,” the Cypriot side’s manager said.

“It was a great game, we kept ourselves in the game, whether it be good goalkeeping or United missing good chances.

“And to score two goals against them was probably more than I could have imagined… I didn’t think until we scored we believed in ourselves, really, and then it gave us something to hold on to.

“They got two quickfire goals but we had chances at 2-1 to get level.

“The third goal has killed us but, you know, on the balance of play United thoroughly deserved the win.”