NAOMH Bríd go into this final knowing they will never get a better chance to turning over this great Myshall team. The finals over the last two years have seen Myshall prevail but there were pockets in each game where Naomh Bríd played as well if not better than their highly decorated rivals. Captain, Lisa McAssey, agrees that now has to be the time.

“I think we have been edging closer. Every time I talk to you, I am saying the players are a developing squad. This is the first year, I can say this is us now. A lot of the players are in their mid-twenties and they have a good head on their shoulders. It is not just fitness. It is how smartly they are playing, the cuteness and how they are integrating together. That has made a huge difference this year. Drawing with Myshall (in the league stages) was great this year but we don’t dwell on that sort of thing now,” she confirms. 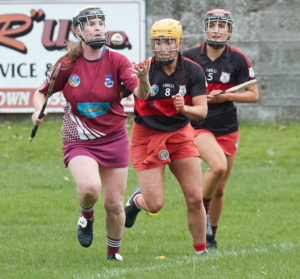 A new manager in Jonathan Tallon has players looking out the same windows but looking out through different angles. The view may change slightly but perhaps they are looking at a slightly bigger picture now?

“That is a huge thing Johnny has introduced into us this year and that is our style of play. He is a Limerick man himself and we are doing things a little differently than what we had been doing. We are a little smarter and that has made a huge difference. We don’t compare ourselves to anybody else but our scoring among ourselves is a lot higher.”

Naomh Bríd were only missing Keeva Collins when they drew with Myshall that day in the league. Myshall were also near full strength.

“It was hit and miss. They were always 2-3 points ahead of us. Luckily for us, many of our players are dual-status so they are extremely fit. I think we had those extra minutes in us at the end and two goals for us in the final ten minutes saw us get the draw. We were delighted with that,” recalled Lisa.

Many of the squad have already won county football titles with Old Leighlin this year. Lisa says that is not a distraction and is probably a help. For her, it is all about mixing the two and doing it well.

“They are fairly intelligent players and they are football county champions.  They have parked that. Their focus is on Leinster and winning a camogie championship. The double would be lovely but the driving force is about getting us over the line as a  team and  as club but not necessarily a double.”

And is this going to be the year for Naomh Bríd. History is against them which will make it more difficult perhaps? McAssey disagrees.

“We lost three-in-a-row. I just take each match as it comes. I never look back at the past. You asked me what the score was in the match when we drew I say I am just worried about the next match. The past is back there. We keep moving. If I didn’t have that attitude I would be fairly depressed,” she says.

For Myshall full-back, Michelle Nolan, the emphasis is not on collecting cups but on enjoyment. Admittedly winning comes a close second but when she looks at her sister, Leanne, who is out of camogie since last year because of a cruciate injury, this year’s priorities are grounded.

“It is very important to enjoy it. At the end of the day, it is a hobby. We were always told to go out there and make sure we enjoy it. We are lucky to be able to go out and play. There is the likes of Leanne  who has done her cruciate and she won’t be able to play. She missed out last year and again this year. We should be happy to play.  Win, lose or draw. I might take that back next week but we are not taking anything for granted,” stressed Michelle.

Myshall are going for a 23rd title in a row.  Different opposition teams have come and gone. All with the intent of replacing them as champions of Carlow.

“Every year there is that pressure in trying to win and keeping the championship. When we do win it is great but teams are coming the whole team trying to knock us off. There was Rangers a few years ago and now it is Naomh Bríd. They are getting stronger and stronger every year. We drew with them in the league and this year it is going to be a tough battle. The toughest ever, I would say,” predicts Michelle.

“It was very close in the league and has been the last two years. They are coming at us year by year.”

Annually, Myshall introduce a couple of young players who are groomed and minded by the likes of Michelle, Kate Nolan, Ciara Quirke and Marian Doyle. 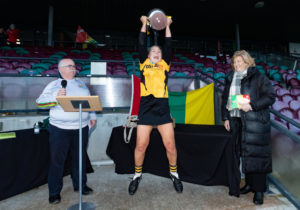 Ciara Quirke jumps for joy as she lifts the trophy for Myshall last year
Photo: michaelorourkephotography.ie

“Our panel has a young profile this year and it is great young players are coming and getting into the senior panel. We are delighted, as a club, to have them coming in the whole time.”

Mark Ayres was manager last year. This year Brendan Hayden takes over completely after acting as an assistant to Ayres. He is well known in Myshall and the surrounding areas. Even when they were well ahead in the semi-final, Hayden urged players not to get into bad habits such as giving away cheap ball or poor passing.

“Every manager says we must play to our potential. Play as best we can. There will be mistakes and you will have to learn from those games. We know Brendan very well. Ever since he was coming to the school. We have a lot of respect for him and he is a very good manager,” says Michelle.

Geri-Mae Mara was the leading scorer for Rangers when they beat Myshall in the semi-final. She will have to be watched by a Burren side who were be looking to Shauna Sweeney in the half-forward line to make sure they keep their end of the scoreboard ticking over. 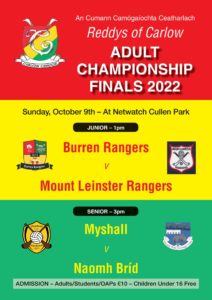