Carlow duo honoured on McDonagh Team of the Year

Mount Leinster Rangers star Nolan is also honoured for the third consecutive season and is joined in the half forward line by teammate Kavanagh who scored 2-49 in five matches. 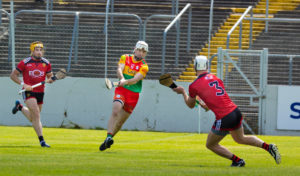 Carlow’s Marty Kavanagh in action against Down during the McDonagh Cup this year
Photo: michaelorourkephotography.ie 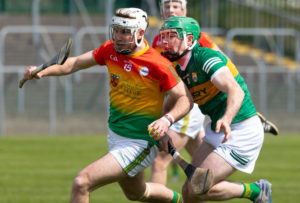 Chris Nolan in action against Kerry in the McDonagh Cup Photo: michaelorourkephotography.ie

Elsewhere, the Antrim hurlers are the dominant presence with the reigning champions claiming seven slots in this Champion 15.

The Saffrons are represented in every sector of the field with goalkeeper Ryan Elliott joined by defenders Joe Maskey, Gerard Walsh and Eoghan Campbell, with Keelan Molloy named in midfield, and Conal Cunning and Ciarán Clarke headlining the attack.

Beaten finalists Kerry are led by star defender Fionan Mackessy who is honoured for the third year in a row, and is joined by Eoin Ross, Mikey Boyle and full-forward Pádraig Boyle who scored 3-64 in six matches.

Offaly dynamo David Nally is named in centerfield with Down goal scoring star Daithí Sands collecting an award to go with the honour he scooped in 2019.

Congratulating the winners, Uachtarán CLG Larry McCarthy said: “The Joe McDonagh Cup once again delivered on its mandate of producing highly competitive, highly entertaining matches and finished with a stunning 5-22 to 4-24, Antrim-Kerry decider at Croke Park.

“There was no shortage of impressive displays throughout the campaign, which is reflected in the spread of five counties featuring here.

“It is a great honour for all of those who have been singled out as being worthy of special praise and I know it is an accolade that will be warmly welcomed by your families, clubs and supporters in your county.”

Tom Parsons, CEO of the GPA, added: “Congratulations to each of the players selected on the Joe McDonagh Team of the Year. Your individual performances stood out as being the best of the best in a great season in the competition. It is no surprise to see Antrim so

strongly represented, but they were pushed all the way by Kerry in the decider and the Kingdom also have a strong presence. Well done too, to the Carlow, Offaly and Down hurlers who’ve been selected.”

Players from the Joe McDonagh Cup were asked to nominate outstanding performers in the competition, with an independent selection committee deliberating over the list of nominees.

The awards will be presented at a gala black-tie function in Croke Park this Friday night. The show will be streamed live on gaa.ie from 7pm and will also feature the awards for the Ring, Rackard and Meagher Team of the Year and the Tailteann Cup Team of the Year as well as the presentation of the overall Players of the Year in the three championships.