THE SETU Derby, played in the SETU Arena in Waterford on Thursday evening, between the home side and Carlow may not have produced the best defending you will ever see but few in attendance were bothered by that as they were treated to brilliant and captivating game.

Respective managers, Michael Dempsey of Carlow and Fintan O’Connor of Waterford, may look to tighten things up at the back in the coming weeks and months heading into the Fitzgibbon Cup but it would be unfair to focus too much on the defending because this was an evening when the forwards shone.

The Waterford forward line was spectacular throughout. Jack Prendergast and Padraig Fitzgerald were a constant menace on the inside line, while Louth’s Darren Geoghegan was near fautless with his dead balls. To add to that, Shane Bennett stamped his class all over proceedings when he strode forward from the half-back line to land the best score of the game in the 24th minute.

Carlow weren’t without their scoring stars either. Their wing-forwards, Kenneth Ryan and Brandon McGinley, were especially lively and Chris Nolan, fresh from being named on the McDonagh Cup team of the year, showed his quality at times as well. 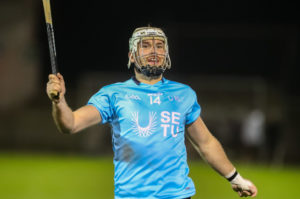 Waterford’s first five points were scored by different forwards, and by the time that Shane Lawlor completed the set of starting forwards on the scoresheet in the 14th minute they led 0-8 to 0-3.

There were various stages throughout the game where Waterford threatened to pull away but Carlow were always dogged, always determined, and managed to stay in the game.

Jack Morrissey and McGinley scored the next two points to reduce the gap back to three.

Waterford continued to carry the greater threat, though. Bennett raised the standard of the game even more when he carried the sliotar on his hurl from one 45 to the other before firing between the posts on the run.

Then the goal they had been threatening arrived when Padraig Fitzgerald showed fine composure when in on goal in the 25th minute and fired home to make it 1-11 to 0-7.

It was a goal that had been coming due to the increasing pressure but Carlow kept themselves in touch by scoring the last three points of the half to leave the score at 1-11 to 0-10 as the teams headed for the dressing room.

Carlow then, remarkably, got back on level terms early in the second half when Kenneth Ryan’s speculative effort was fumbled into the net, followed by another McGinley point.

However, no sooner were the teams level than Waterford struck for another goal, this time Stephen Mangan played the defence splitting pass and Cathal Kiely did the rest when it on goal.

Geoghegan and Prendergast added points to quickly stretch the lead for Waterford but encouragingly for Carlow, they just refused to go away.

Ryan and McGinley again scored points and they were back level again in the 40th minute when Ryan’s effort from a tight angle, after the Waterford defence had failed to clear their lines following a huge ball into their square by Carlow full-back Padraig Delaney, somehow squirmed through Sean Fitzpatrick.

However, once again, just seconds after scoring an equaliser, Carlow were picking the ball out of their net at the far end. Prendergast was the scorer this time after being picked out by a good pass by Geoghegan.

Waterford enjoyed a goal spell after that and went two goals clear when the excellent Fitzgerald scored their fourth of the night midway through the half to make it 4-14 to 2-14.

But once more, Carlow managed to drag themselves back into the game. Midfielder Thomas Keyes scored a superb goal after a good burst of pace and then points from Nolan and Morrissey left just a point between the teams with seven minutes to play.

After though, finally and decisively, Waterford took a hold of the game.

Another excellent scored by Fitzgerald sparked a run that saw them score five of the last six points of the game to wrap up the win in a hugely entertaining game.

After a close first half, Technological University Dublin opened up in the second period and coasted to an easy win in this senior football division 1 first round league game at SETU Carlow on Wednesday.

The Barrowsiders got an early warning sign about the potential of the visitors when TUD scored a point within six seconds of the start and quickly added two more. The home side got back into the game and led by full-forward, Cian Farrell, who scored four points in that opening half they led 0-6 to 0-4 at the interval. Also on the scoresheet for Carlow were Adam Steed and Colm Hulton.

On the restart, Farrell added to his total immediately after the throw-in  and it looked as if the home side were going to pull away. As it turned out it was TUD who went up several gears and Ciaran Murphy and Sean Guiden pointed. A move from deep produced a penalty for the Dubliners and Mark Lavin found the net.

The momentum had changed and the same player added another three-pointer. With over a quarter of the game to go, the writing was on the wall for the home side. Lavin completed his hat-trick to leave Carlow looking like a shell of the side they had looked in the second quarter.

They found a measure of respectability when Steed scored a goal and Farrell also landed a point. For new manager, Billy O’Loughlin, he will have a lot to think about before they face UCD  and DCU in upcoming league games.

Except for a short spell early in the second half, SETU Carlow dominated this senior camogie division 2 colleges league game at SETU Carlow on Tuesday. The visitors never got going in the first half and the home side made it pay on the scoreboard. Ciara Kavanagh, Aoife Guiney and Emma Cody all raised white flags and Kavanagh went one better when she took a pass from Guiney and found the net with a rocket of a shot.

The lead went out to 1-8 without reply before Chloe Farragher scored 1-1 for Trinity in the space of a few minutes. SETU had the last word of the half through points from Amy Brennan and Sophie Bermingham which helped them into a 1-10 to 1-1 lead going into the second period.

Three minutes in, Trinity scored their second goal when the Carlow goalkeeper, Chloe Kelly McDonald did well to parry a shot from Farragher but Molly Walsh was on hand to guide the ball over the line. Now there was only six between them and a little question had been asked.

Carlow were up to the task and they scored a second goal through Bermingham. That was effectively a match-winner and they made doubly sure when Linda Daly ran through the defence and fired into the top-right hand corner of the net at the town end goal.

Trinity almost manufactured a third goal but Farragher saw her shot go to the right hand post and wide.