Byrne will bring the experience to the front row as he lines up alongside John McKee and Thomas Clarkson, both making their first starts of the season. 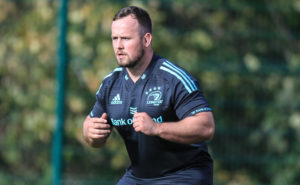 There’s plenty of new faces elsewhere in the side as well. It’s a new back three named by Leo Cullen this week with two Academy players, Chris Cosgrave and Rob Russell, joined by the experienced Dave Kearney. It will be Cosgrave’s first involvement of the campaign and only his second start ever.

In the centre Charlie Ngatai is joined by Liam Turner, with Irish internationals Luke McGrath and Ross Byrne the half backs.

Ross Molony and Jason Jenkins are selected in the second row with Rhys Ruddock back as captain.

On the bench it will be a special weekend for the families, friends and clubs of Tadgh McElroy and Academy duo, Charlie Tector and Ben Brownlee, with all three in line to make debuts off the bench.

McElroy started out his rugby journey with Dundalk RFC, and most recently played with Lansdowne FC in the Energia All-Ireland League. He signed a short-term deal with Leinster Rugby last month after a string of impressive performances for Leinster ‘A’.

Wexford born Tector, played with Enniscorthy RFC, while also attending Kilkenny College. He played a leading role in the Ireland U-20s Grand Slam success in 2022, including a late conversion to seal a one-point win against France. Like McElroy, Tector now lines out with Lansdowne FC.

20-year-old Brownlee came through Wanderers FC before attending Blackrock College. His father Allan would have played with the London Irish U-20s, while his great-uncle Ronnie Dawson captained Leinster, Ireland and the British & Irish Lions. Brownlee plays with UCD RFC in the Energia AIL.