Cheltenham Gold Cup is the next aim for Hewick

NEW equine star, Hewick, received a hero’s welcome when he arrived at the Royal Oak on the Monday of the Hallowe’en Bank Holiday weekend. The rain poured down but that didn’t dampen the enthusiasm of the large crowd who were overjoyed to be present. In the space of a few months,  Hewick has won the Betfair 365, the Galway Plate and the American Grand National. The horse will be rested now and will not run again until the Cheltenham Gold Cup. There are a range of options open for connections but the trainer, John Shark Hanlon, says their minds are made up.

“He goes for the Gold Cup.  Distance doesn’t really matter. He has a huge choice of races but it is the Gold Cup for us,” said the triumphant trainer. 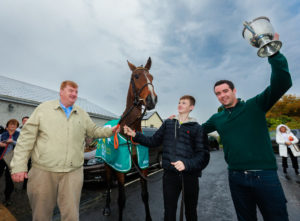 The Shark arranged for a free bar for an hour at The Pint Depot while food was also provided. The pub was humming as people revelled in the atmosphere.

“It is unreal. People came out in the spilling rain and they are all here to greet us. It is very special. In our little home town here, nothing happens but when it does, we have to make the best of it,” said the trainer.

Winning owner, TJ McDonald, said Hewick has given them days they never thought was possible.

“Shark’s mother, Mrs Hanlon, said to me before we came out here today, did I ever dream of this. You dream of the big days but you don’t dream that a horse will have three big days like this,” said McDonald.

Even the fall in the Kerry National in Listowel didn’t damage their hopes.

“Everything happens for a reason. We were very unlucky. We were definitely going to America. Shark was dead set on going. That was always in the plan. Even when he ran in Sedgefield last October we had thought about it. It was mentioned but we put it in the back of our minds.”

The owner says he trusts the trainer to make the right decisions but winning at the other side of the Atlantic was an unbelievable feat.

“I couldn’t pick out one win over another but for sure America was special. All the media was behind him and everyone was wishing us luck. It was special to do it for everybody else. Not just for me,” acknowledged McDonald who has an excellent relationship with Hanlon.

“What works for me and Shark and he will tell you that himself, I never really tell him what to do. I always have faith in him. I let him do the training. I let him do his job. He has always been 100% for me and I cannot thank him enough. I think every horse I have had with him, it has won.”

Chris McGill is the stable head lad. From Tullow but living in Carrick-on-Suir for the last eight years, he commutes on a daily basis to the yard.  He doesn’t travel with the horses when they go racing but he admits he thought the trainer was taking on too much during the season. He was delighted to be proved wrong.

“I thought he was mad doing what he was doing particularly the Galway Plate as he has so little experience over fences. I thought this can’t happen. This is dreaming and to go and prove us wrong speaks for itself. He was so confident going to Galway. Shark said to me the trip might be the only thing but we were away with it. He proved himself right.”

The 29 year old loves working for the trainer.

“I am with Shark a long time. I was in a riding school in Kilkenny for four or five years. I thought that was not enough. I went here to the Shark and never left. That was eight years ago. This is the best year ever. It will be hard to top it,” McGill suggested.