EYES down for a brand new Carlow GAA fundraiser!

Gaelic Bingo is coming to Carlow from 10 November and clubs around the county have been called on to support a fundraiser that could raise significant funds for both the county board and the clubs themselves. 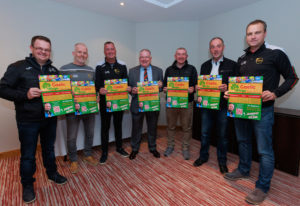 The fundraiser will see a weekly bingo game hosted online by KCLR’S Brendan Hennessy every Thursday from 8pm, and he will bring his usual mix of humour, charm and local knowledge to the programme.

It will be up to the club to sell the bingo books players, €10 for one book, €15 for two, and then players can tune in and play at home and take their chance to win.

All money raised will stay in the county, with 60% of the funds raised going to the county board and 40% going to the clubs. The big plus for the clubs is that all the money they make will be complete profit with the county board and Gaelic Bingo looking after all the administration and prizemoney. Bingo nights have proved very popular among GAA clubs around the country in recent times but it is estimated that once all the prizes and admin are looked after that a club gets to keep 25% of the money raised on a night so this is a chance to increase the value of their ticket selling.

“It’s hard to make money sitting down but this is as close as it gets,” said county chairman Jim Bolger.

Rathvilly’s Jim Dunne led a presentation to club delegates and explained that the success or failure of the venture will depend on the clubs buying into it.

“This is a joint venture between the clubs and the county board. It is important that the clubs get behind it, the key is the collective,” he said.

Online bingo remains popular said Dunne, and will continue to be so, and it’s envisaged that players will come together in their houses, or even in their clubs, to watch Brendan Hennessy live on a Zoom call every Thursday from 8pm to bring a social element to it as well.

“Online bingo is going from strength to strength and I think we are getting in at the right time. It is not a fad coming to an end, it’s here to stay,” said Dunne.

Players can buy their books at www.gaelicbingo.ie and before completing your purchase, you are prompted to tick the club you are associated with.

The fundraiser was launched on the same night as Wicklow GAA announced a sponsorship deal of €1.5m which again brings into sharp focus just how important finances are in the modern GAA world.

It was emphasised that this fundraiser has the potential to be a huge success. The great thing about it is that clubs can sell tickets to those outside their GAA circles and there is the feeling of giving something back to the buyer rather than simply selling a raffle ticket. Although the GAA clubs of Carlow will always be the priority for the county board it could eventually be opened up to incorporate different clubs and organisations around the county and, because everything is done online, outside Carlow and even outside Ireland.

“It is the first time that a county board in Ireland has tried something like this, a huge amount of work has gone into bringing it to this stage and we think it can be a huge success with the support of the clubs,” said Dunne.

Tickets for the first game on 10 November are already on sale and participating clubs will be ramping up their efforts to sell books in the coming days. 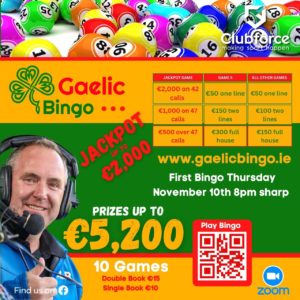