The Tullow teenager made her international debut last August during the series in Japan and has made a stunning start to life in the AIL with Old Belevdere where she is currently the top scorer in the competition. 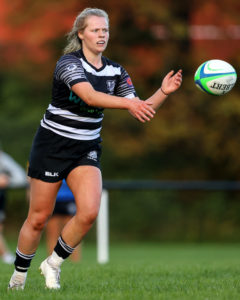 “A lot of work has gone on behind the scenes to ensure we have the right structures in place to support these athletes and it is an exciting time for all involved. We have 29 players contracted across the XVs and 7s Programmes and the contracting process is ongoing.”

As the players get to work at the HPC, there is competitive action to come in the 2022/23 Vodafone Women’s Interprovincial Championship ahead of the 2023 TikTok Women’s Six Nations.

The competition window for the Interprovincial Championship has been confirmed and brought forward by two weeks. The Championship will run for three rounds in a round-robin format as follows:

The IRFU has also confirmed broadcast details for the Energia All-Ireland League Women’s Division Final in December. The game will be live on TG4 on Friday 9 December with a 7.45pm kick off.

“Friday evening is a great slot for televised rugby and we can count on another exciting affair after last season’s decider. There is a proven audience for domestic rugby and we are working with TG4 to see how we can provide even more options for rugby fans.”

On the new window for the Interprovincial Championship, McDarby added: “This has been a season of realignment as we evolve towards a new era of professional rugby for Irish women in the 15s game and a new World Rugby calendar.

“We’re grateful to our clubs and provinces throughout this process and we’re glad to see the Vodafone Women’s Interprovincial Championship continue to play a key role in the development of players for High Performance rugby.

“We’re also excited to get to a point where we can offer long-term clarity and season structure for our domestic rugby stakeholders. That will be guided by the Women In Rugby Action Plan Review, a report on which due in the coming weeks.”

The IRFU will also be meeting with Energia All-Ireland League Women’s Division teams in the coming days to finalise details for the one-off AIL Cup Series commencing in early 2023.