THE parents of sisters Roisin and Aoife Carroll, who lined up against each other in the Carlow Ladies Junior Football Final on Saturday, have said that their over-riding emotion was one of pride and joy.

Aoife lined out at midfield for the eventual winners, Kildavin-Clonegal, while her younger sister, Roisin, scored a point for Ballon in a game which went all the way to the wire. 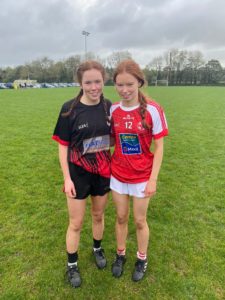 Sisters Aoife and Roisin Carroll played against each in the Tellab LGFA Junior Final on Saturday. Aoife lined out for eventual winners Kildavin/Clonegal, while Roisin played for Ballon

“The over-riding emotion was pride, I would have to say. The two girls play football and the two of them made a final,” said Martina Carroll, the players’ mother.

“I suppose the big thing, and this is from a young age, that they have to have respect for the opposition. That has been driven in from an early age. The mantra has always been humble in victory and gracious in defeat,” explained Martina.

There was a big crowd in attendance for the decider. Martina and her husband, Joe, kept themselves to themselves and just cheered on both their daughters.

“On the day, we didn’t want a big crowd around us. It is hard between the two sets of supporters so we went over to the far side where there was hardly anyone. We didn’t say too much. Just words like good girl, Aoife. Good girl, Roisin. We kept it positive. We were so proud. We spoke about it at home. There was going to be only one county medal coming home to the house and what we wanted they would have a good match on the day.”

While there was a winner and a runner-up , the parents mother pointed out both players played well.

“They both came home happy with their performance. That was the best of what we could hope for,” she said.

The family home is based nearer to Kildavin than Ballon. Roisin and Aoife both played with Ballon initially but when an adult  Kildavin-Clonegal team was founded two years ago, it made sense for Aoife to play with the new club. She had also taken a year off to do her Leaving Certificate.  Roisin stayed with Ballon as there was no signs of an underage team for her in Kildavin-Clonegal at the time. Little did the whole family realise that the two girls would eventually meet in a junior final.

For the Carroll family,  their daughters are winners. A score-line doesn’t define their achievements.

“We want both of them to play football but naturally we would like to have both of them on the same team. The most important thing is they play sport,” confirmed Martina.