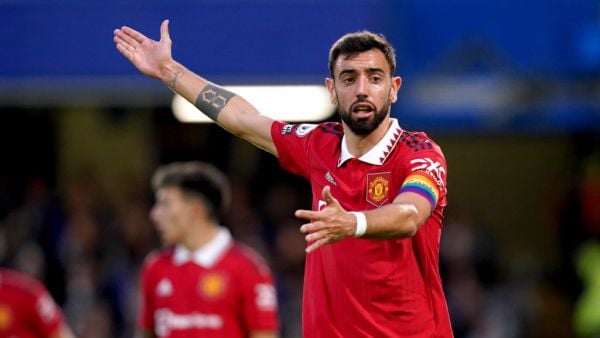 Fernandes will serve a one-game ban after receiving his fifth yellow card of the season during last week’s home win against West Ham.

He played the full 90 minutes in United’s Europa League win against Real Sociedad on Thursday night and Ten Hag was undecided when asked about the Portugal midfielder’s absence at Villa Park.

After his side’s 1-0 win in San Sebastian, Ten Hag said: “We know that we have to replace Bruno, that is quite clear.

Donny van de Beek started against Sociedad after his recent return to fitness and could make his first Premier League start of the season at Villa Park.

Alternatively, Christian Eriksen could switch into a more advanced role, while Fred and Scott McTominay can help to fill in the gaps after starting on the bench on Thursday.

Ten Hag could still be without Antony, Jadon Sancho and Anthony Martial on Sunday as they battle for full fitness after their recent absences.

Ten Hag said: “It’s difficult to say in this moment. I have to talk with the medical and the performance team as they did a programme in Manchester.

“I have to hear how their progress was and if they can be available for Sunday’s match.”

Brazil winger Antony and England international Sancho have missed United’s last two games due to a leg injury and illness, respectively, while Martial has struggled with various problems all season.

The France forward has been restricted to three Premier League appearances under Ten Hag due to hamstring, Achilles and, latterly, back injuries.

United are bidding to extend their unbeaten run in all competitions to 10 games and maintain their top-four challenge, while Villa’s new head coach Unai Emery will be in the dugout for the first time.

Ten Hag must also decide whether to recall Harry Maguire, who stepped off the bench as a makeshift striker against Sociedad, or stick with Lisandro Martinez and Victor Lindelof at the heart of defence.

The former Ajax boss added: “I have to see because Aston Villa is going to be a difficult one as we don’t know.

“They have a new manager and I have to have a look and analyse from that game, from that team and then we have a choice. But Licha (Martinez) and Victor played really well together over some more games.

“But I also think Licha and Harry last Sunday against West Ham United kept a clean sheet and also did really well, so that’s another choice we have to make.”