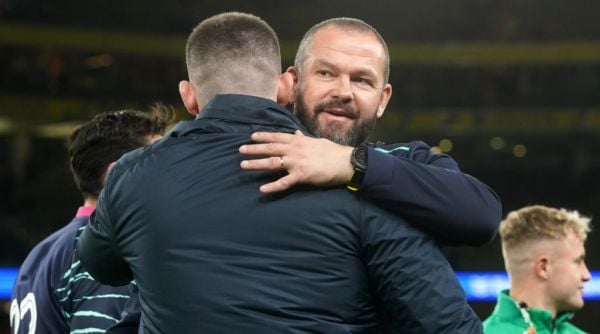 Andy Farrell hailed Ireland’s “guts” after his side shrugged off a host of injury setbacks to cement their status as rugby’s top-ranked nation with a thrilling win over world champions South Africa.

The in-form Irish laid down a marker ahead of next year’s World Cup pool-stage meeting with the Springboks by holding off a late fightback to claim a deserved 19-16 Dublin success.

Mack Hansen’s scintillating try added to a bulldozing effort from Josh van der Flier early in the second half before scores from Franco Mostert and Kurt-Lee Arendse brought the tourists to within touching distance.

Ireland captain Johnny Sexton kicked three penalties, including what proved to be a match-winning one six minutes from time, to ensure the hosts’ autumn campaign began with a bang.

However, a stunning victory came at a cost, with Farrell awaiting full details on the first-half injuries suffered by centre Stuart McCloskey, centurion Conor Murray and prop Tadhg Furlong.

Asked what he learned about his squad, the head coach replied: “A lot; that we’ve got resilience, we’ve got guts, character.

“We wanted the different type of Test match that was a proper old-fashioned slinging match to see where we’re at in that regard. And, wow, I thought the character of the side was immense, for all sorts of reasons.

“You start with them coming into camp and a lot of them being undone in terms of where minutes is concerned.

“I thought we showed fantastic spirit. Having said that South Africa are a hell of a side and it was a hell of a Test match and it could have gone either way.”

South Africa suffered their heaviest defeat to Ireland when the sides last met – a humiliating 38-3 Aviva Stadium thrashing in 2017.

The Springboks returned as holders of the Webb Ellis Cup and seeking to avenge that embarrassment against hosts who shot to the top of the global rankings on the back of a stunning summer series win in New Zealand.

Following a stop-start opening period which ended 6-6, the game sparked to life with Hansen capping a spellbinding move to put Ireland in control of the scoreboard just three minutes after Van der Flier powered over.

Farrell is hopeful the injuries to McCloskey (twisted arm) and Furlong (jarred ankle) are not serious, while he had less of an update on scrum-half Murray, who limped off on the occasion of his 100th cap due to a groin issue.

“I’m unbelievably proud of them of how they’ve applied themselves,” continued the Englishman.

“Our set-piece was unbelievable and on the back of that our defence was immense.

“It was a proper Test match. If the result had been different for us I’d still have felt the same way.”

South Africa head coach Jacques Nienaber conceded the better team won and was left to rue a couple of wayward kicks at goal.

“I thought Ireland deserved this one,” said Nienaber. “They showed why they are number one in the world.

Speaking of the goal-kicking, he said: “Probably if people look at it they’ll say that was the difference between the two teams.

“Johnny missed also a kick or two but he nailed the big ones and we missed a couple and it’s something we’ll keep working on.”