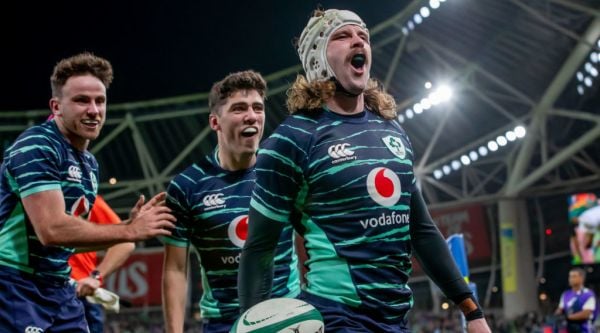 Mack Hansen scored a scintillating try as Ireland shrugged off a host of injury setbacks to cement their status as rugby’s top-ranked nation by holding on for a tense 19-16 win over world champions South Africa.

Connacht wing Hansen lit up a pulsating Dublin Test match by gleefully diving over early in the second half to cap a spellbinding Irish move from right to left.

The eye-catching score added to a bulldozing effort from Josh van der Flier as Andy Farrell’s in-form hosts laid down a marker ahead of next year’s World Cup pool-stage meeting with the Springboks.

Scores from replacement Franco Mostert and Kurt-Lee Arendse brought the tourists to within touching distance late on but the hosts, aided by nine points from captain Johnny Sexton, dug in to begin their autumn campaign with a bang.

Victory, however, came at a cost as centre Stuart McCloskey, centurion Conor Murray and prop Tadhg Furlong were each forced off due to first-half injuries.

South Africa suffered their heaviest defeat to Ireland when the sides last met – a humiliating 38-3 thrashing on this ground in 2017.

The Springboks returned as holders of the Webb Ellis Cup and seeking to avenge that embarrassment against hosts who shot to the top of the global rankings on the back of a stunning summer series win in New Zealand.

Murray was afforded a standing ovation by the capacity crowd as he led out his country on the occasion of his 100th cap amid the excitement of booming pyrotechnics.

The much-hyped contest took time to ignite, with Sexton and rival fly-half Damian Willemse exchanging early penalties during a frantic opening which quickly developed into a more attritional affair.

South Africa enjoyed the better territory, while the Irish defended doggedly and were eventually beginning to show signs of their free-flowing best when Cheslin Kolbe was sin-binned for a tip tackle on Hansen.

Willemse shanked his second penalty attempt before the hapless McCloskey was forced off, having only gained a rare Test opportunity due to Robbie Henshaw pulling out on the eve of the game, to be replaced by debutant Jimmy O’Brien.

Ireland hooker Dan Sheehan was unfortunate to be denied the opening try in the 32nd minute when he knocked on before grounding after superbly charging down Willemse’s attempted clearance.

Scrum-half Murray, who became only the eighth man to reach a century of Test caps for Ireland, then joined McCloskey in making a premature departure, leaving the field in obvious distress due to an apparent groin issue.

Sexton slotted between the posts to swiftly nudge his side back ahead but Kolbe’s kick wiped out the lead with the final action of a stop-start half in which defences were dominant to leave the score level at 6-6.

Prop Furlong did not reappear for the second period after sustaining an ankle issue just before the break.

Following a lengthy video check, Ireland claimed the first score of the bruising contest seven minutes after the restart when Van der Flier managed to ground wide on the left just before a rolling maul was bulldozed into touch.

The hosts quickly took control of the scoreboard courtesy of the best move of the match.

South Africa responded and it took a robust, last-ditch tackle from Gibson-Park to thwart the onrushing Deon Fourie.

Mostert, on in place of the injured Lood de Jager, successfully stretched for the line to set up a tantalising final 13 minutes but Kolbe somehow struck the posts with the conversion.

Sexton’s third penalty of the afternoon briefly calmed Irish nerves before Arendse crossed wide on the right to increase the tension.

Yet Ireland, dubbed “softies” by Springboks director of rugby Rassie Erasmus just three years ago, had the resilience to get over the line and make it 10 home victories in a row with another headline-grabbing result.