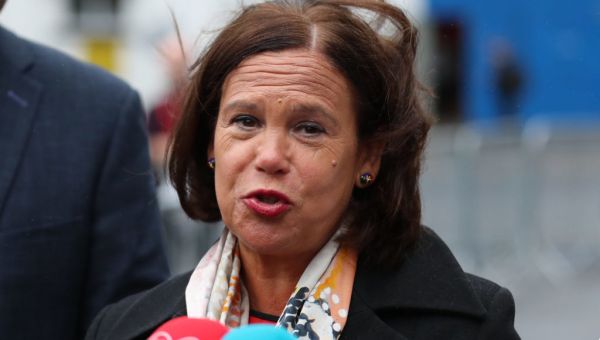 Mary Lou McDonald said that had she known about former Sinn Féin councillor Jonathan Dowdall’s involvement in criminality, he would not have been “anywhere near” the party.

Ms McDonald said she was “profoundly shocked” to learn of Dowdall’s role in gangland crime.

Last month, Dowdall was sentenced to four years in prison for facilitating the murder of David Byrne at the Regency Hotel in 2016.

Dowdall, who turned state witness in the Regency murder trial, was also convicted of interrogating, threatening and waterboarding a man in January 2015.

Dowdall was elected as a Sinn Féin councillor to Dublin City Council in 2014. He left the party a short time later.

Ms McDonald said: “Had we known that he was involved in any form of criminality, and I have to say I was profoundly shocked, as were many, many others, to discover his criminal activity, he wouldn’t have been anywhere near Sinn Féin.

“He wouldn’t have been anywhere near me or anybody else. The courts now are dealing with this matter. Anybody involved in criminality, gangland, they [should] face the full rigour, the full rigour, throw the book at them is what I say.

“I represent a constituency that has borne the brunt of criminality and gangland violence and thuggery and there can be no truck with it.

“No room for it and certainly, I am relieved, pleased to see that justice now, the wheels of justice in motion, we leave it to the courts to deal with all of that.”

Ms McDonald denied that Dowdall’s association with the party has been damaging.

“I think people realise and accept, I hope, that we had no notion nor had others of the fact that this individual was involved in criminology. None at all. None at all,” Ms McDonald added.

“This person, at one point, was a person of very good standing in the north inner city of Dublin so the shock was not just ours but more widely felt but let me just assure you, had we known, he would not have been anywhere near any of us or in the Sinn Fein party.”

Asked whether parties should carry out garda vetting of those wishing to join, she said: “No, no, that would be crazy.”