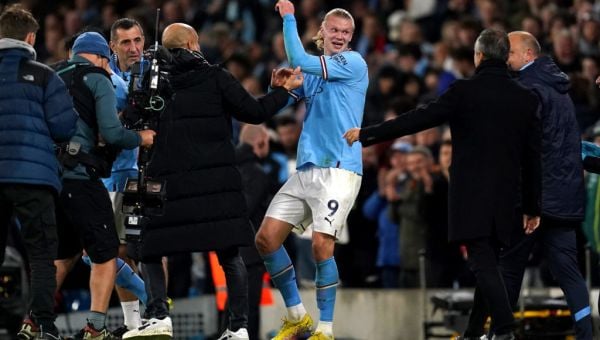 The Norwegian’s late penalty winner against Fulham was his 18th goal of the league season, already matching the top scorers from the 1997-98 and 1998-99 campaigns.

Here, the PA news agency looks at how soon Haaland could overtake other previous winners of the award, should he keep up his scoring rate.

(Fixtures are subject to change as rearranged dates for City’s games against Arsenal and Tottenham have yet to be announced.)

Haaland will reach Anelka’s total, the lowest to win the award outright, if he plays and scores next week.

Twenty goals before the new year would be a truly impressive achievement for Haaland.

The tally that has won each of the last three Golden Boots would be within range for Haaland in the first fixture of 2023.

Could Haaland add to his derby hat-trick at the Etihad Stadium by reaching 25 in the return fixture?

Another Golden Boot for @HKane! Enjoy all 29 of his @PremierLeague goals in 2016/17 in just over 100 seconds… #OneOfOurOwn pic.twitter.com/ggIrbsN1hV

The hallowed 30-goal mark already seems a matter of when rather than if, fitness permitting.

The record for a 38-game Premier League season may not last into March if opponents cannot find a way to slow Haaland down.

Even the 42-game record, from the league’s early days with 22 teams, would only last a further week at Haaland’s current rate.