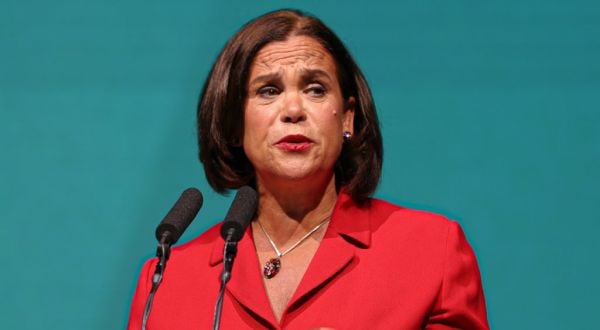 Sinn Féin leader Mary Lou McDonald has said she will speak to all parties about forming a government after the next general election.

Ms McDonald said the party will go out to win every single seat, but once the votes are counted the Dublin TD said she will speak to everyone.

But she went on to say that the best option for the country would be a government that does not include Fianna Fáil or Fine Gael.

It comes as a Sunday Independent/Ireland Thinks opinion poll revealed that support for the party remains ahead of Fine Gael and Fianna Fáil.

However, the poll also found that support for Sinn Féin dropped three points to 34 per cent, but the party retains a 13-point lead ahead of Fine Gael at 21 per cent, while Fianna Fáil sits at 17 per cent. Support for both parties remains unchanged.

The poll was carried out among 1,002 people.

Support for Sinn Féin has been growing in recent years, with the party taking 22.3 per cent of first preferences in the 2020 general election.

The party has been polling well since then, with the vast majority of its support base coming from young people.

However, Ms McDonald said there are no “foregone conclusions in elections”.

“We will keep working very, very hard,” she told RTÉ’s The Week In Politics.

Meanwhile, Ms McDonald repeated her calls for a joint authority between Dublin and London if an executive in Northern Ireland is not restored.

The Sinn Féin leader said that if the DUP continues to boycott the Northern Ireland Assembly, then the British and Irish governments should form a partnership.

She said that there should not be direct rule if an executive cannot be formed.

Ms McDonald said: “The reason I made the point as regards direct rule is, we have to be absolutely clear on one thing and it’s this. It is not a choice between powersharing on the one hand or direct rule from London on the other.

“The best scenario is that the executive is up and running. So the British government, having said now that we won’t have an election this side of Christmas, needs to very speedily this week set out the plan of engagement with Brussels, to sort out the outstanding implementations of the protocol to get the executive up and running.

“If at that stage the DUP still are on boycott mode, then it is partnership between Dublin and London.

“I’d use the term joint authority, partnership, whatever language you use, it has to be a co-equal situation and it has to reflect not just the building blocks of the Good Friday Agreement, it also needs to take account that the politics in the North has very much changed.

“There is no longer a unionist electoral majority, that you now have for the first time a nationalist, a republican, Michelle O’Neill, as first minister designate.”