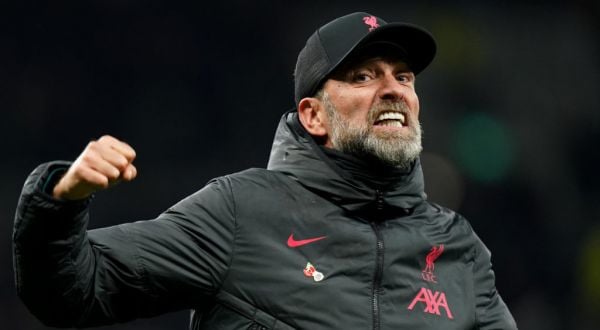 Liverpool manager Jurgen Klopp talked up the impact of “team player” Mohamed Salah after his brace at Tottenham earned a first Premier League away win of the season following a hard-fought 2-1 victory.

Salah struck twice in the first half, firing home after Darwin Nunez’s 11th-minute pass before he latched onto Eric Dier’s mistake and lobbed Hugo Lloris five minutes before the break.

Harry Kane reduced the deficit with 20 minutes left for Spurs, who produced their trademark second-half rally but Liverpool held on to end their poor run of away form in the Premier League.

Last season’s joint Golden Boot winner Salah had endured a slow start by his own high standards with only five goals during the first two months but now has 11 in his last 12 matches.

“But everyone knows when you look back at his career, everybody will remember one of the best strikers you ever saw because the numbers will be absolutely insane.

“Tonight what pleased me the most is he scored the two goals and then he played like a real, real team player.

“I am not surprised by that but it is just important because he got confronted with these questions as well about the slow start and then it is like (in his head) you have to score a hat-trick. But it was all about first defending and then you will get your chances again.

“Really pleased for him, top performances and sure outstanding attitude tonight.”

The Liverpool boss was quick to shut down talk of how far off their best level they were but made reference to the fact it was a draw with Tottenham in May that cost them the Premier League title.

“Last year we nearly – and we know you can write that in big letters – but we nearly won all four competitions but we drew twice against Tottenham,” he added.

“Winning here is incredibly difficult and so it is not about now we have to play all the time like this. What we have to show is the attitude and the commitment to defending, that is what we have shown definitely 100 per cent.”

Klopp marked all three points with his post-match fist pumps to the travelling Liverpool fans and conceded it had been a long time coming.

He said: “It was not my plan, actually. I didn’t want to do it but I got carried away and thought the people deserved it a little bit.

“It was tough times, they had now to travel a lot in the Premier League until they saw these first three points so I got a little carried away but it is big, absolutely big.”

Conte started his press conference by reopening old wounds after Klopp had criticised his style of football following their draw back at Anfield last season.

“Before I answer your question, Jurgen was happy for the way we played tonight? Yeah? No, because it was important to know his opinion,” the Spurs boss quipped.

Tottenham were punished for a slow start when Salah fired Liverpool into a deserved early lead but the hosts responded well with Alisson Becker diverting Kane’s cross onto the post before the Reds number 11 grabbed his second when Dier miscued his header.

Kane gave Spurs hope with a fine first-time finish, after Dejan Kulusevski made an instant impact off the bench, but after Clement Lenglet and Rodrigo Bentancur failed to make the most of headed chances, the hosts tasted a third defeat from their last four league games.

Ivan Perisic had hit the crossbar early into the second half after the home fans had booed at the break.

“We have to show in every moment great respect for our fans because they are our fans, they pay the ticket. At the same time, if you ask me if I was a bit disappointed? Yes,” Conte insisted.

“I continue to repeat always the same situation from the start of the season and I say we have just started a process. I think after one year we made a lot of improvement.

“If someone thinks that we are already ready to win, I have to be honest with you and tell you it will be really, really, difficult. Because when you start and Liverpool is a good example, when you start a process, you need time and patience.”