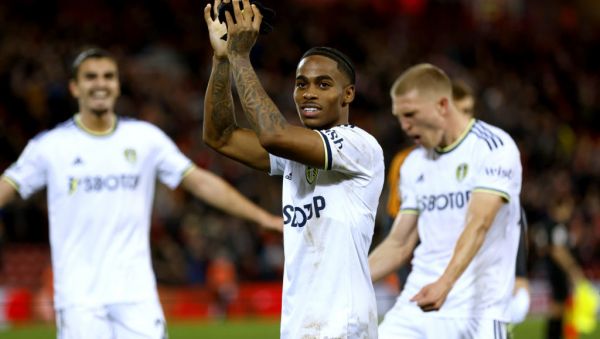 Dutch forward Summerville was Leeds’ match-winner for the second successive week in their thrilling 4-3 win against Bournemouth at Elland Road.

The 21-year-old followed up his 89th-minute goal in last week’s win at Liverpool with another late strike on Saturday as Leeds rallied from 3-1 down to clinch back-to-back Premier League wins for the first time this season.

Cooper said in his post-match interview: “We see it day in day out with Cry in training. Jesse has just been waiting for the chance to put him in and he’s been unbelievable.

“He has got to keep pushing, keep striving to be better. We’ll look after him.

“He’s going to have an unbelievable career and we’re delighted to have him here.”

Bournemouth stormed into a two-goal lead after Rodrigo’s early penalty for Leeds, with Marcus Tavernier, Philip Billing and Dominic Solanke all on target.

Leeds boss Jesse Marsch responded by sending on substitutes Willy Gnonto and Sam Greenwood and both helped turn the game on its head.

Greenwood curled in a superb 20-yard effort and after Cooper’s header had hauled Leeds level, Gnonto’s driving run from deep in his own half set up Summerville for his emphatic finish.

Leeds had been booed off at half-time, but back-to-back wins have lifted them out of the bottom three up to 12th before Sunday’s fixtures.

Cooper added: “We pushed and we pushed, then we’ve scored a lot of good goals, the dressing room is buzzing. We’re delighted with that.

“We’ve got to keep pushing. We know we’ve got a long way to go and that will be the message to the boys. We’ll keep going.

“We’ll enjoy this win with our fans, then we’ll go again. It’s a great result for us, it’s back-to-back wins, which is difficult in this league.”

Bournemouth let slip a two-goal lead for the second week running having lost 3-2 to Tottenham before the trip to Elland Road.

It was a fourth successive league defeat for interim boss Gary O’Neil and Solanke summed up the feeling in the Cherries’ camp after they slipped to within a point of the relegation zone.

“We’re really frustrated,” the striker said in his post-match interview. “It’s the second game in a row we’ve been two goals up and managed to lose the game.

“It’s an issue we need to fix. It’s not really good enough losing after a two-goal lead, two games in a row, we need to put it right.

“(The dressing room) is obviously how you’d expect. There’s no positives at the moment, only negatives.

“We need to put it right because the first half, we were playing so well and we need to figure out how we can seal the game.”