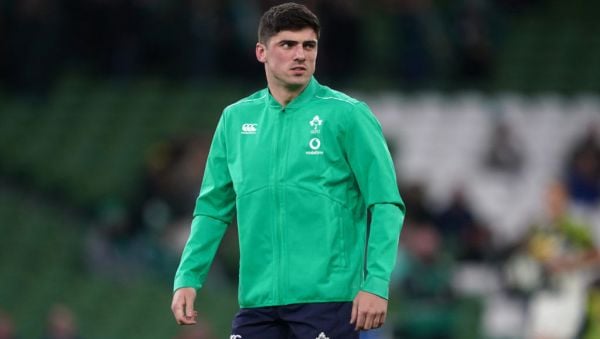 Jimmy O’Brien admits he only expected his Ireland debut to be a brief cameo after capping a whirlwind few days by playing a starring role in Saturday’s statement win over South Africa.

The versatile Leinster back was thrust into the Test arena with just 26 minutes on the clock against the Springboks following an injury to Ulster centre Stuart McCloskey.

O’Brien was not even named in Andy Farrell’s original matchday squad but was added to the bench on the eve of the 19-16 win after McCloskey was promoted to the starting line-up to replace the injured Robbie Henshaw.

What a performance by debutant, Jimmy O’Brien. What a game to win your first cap. 🧢#FromTheGroundUp pic.twitter.com/RdJwoMUlMQ

The 25-year-old, who was initially due to play right wing for Ireland A against an All Blacks XV on Friday evening, came on to partner Garry Ringrose in midfield and performed admirably.

Despite a few nerves, he played down light-hearted claims from captain Johnny Sexton that he was “s****ing it” as he reflected on an unforgettable career highlight.

“Thank God we won because it could have made it a lot worse if we’d lost, I wouldn’t really be celebrating half as much,” said O’Brien.

“I’m just delighted to get my first cap. I found out the other day I would be on the bench and I just hoped I’d get on for maybe two minutes at the end or something like that, so to get on that early and play most of the game and win is amazing.

“It was obviously different plays for the two teams, for the New Zealand team and the South Africa team, so I had to widen my memory of the plays and sit down with the lads.”

Asked about Sexton’s comments, he replied: “I think he might be adding legs to that story but first half I thought there was no way (I would be coming on), I thought they’d bring Joey (Carbery) on and get Johnny to cover 12.

“There was a split second when I was maybe s****ing it but I got over that quickly.”

Quickfire second-half tries from Josh Van Der Flier and Mack Hansen, plus three penalties from Sexton, helped Farrell’s side down the world champions in Dublin.

O’Brien revealed an informal conversation with Ringrose on Friday evening prepared for him for an unexpected outing in an unfamiliar position.

“Thankfully, I sat down with Garry on the off chance I was going to cover 13,” he said. “Faz (Farrell) told me I was covering 13 so that was so helpful.

“The camaraderie of the group is amazing. Everyone is so delighted, I was nervous about my first cap but the lads were so happy, they filled me with confidence being so relaxed about me playing 15, wing, 13, it speaks volume for the group we have.

“I chatted to Garry, said ‘let’s do this’ and from there it flowed. No one batted an eyelid which filled me with a lot of confidence.”