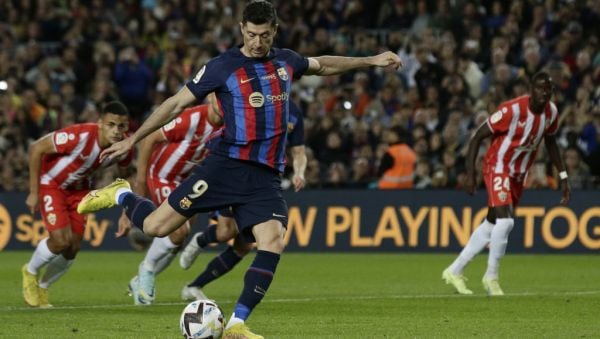 Robert Lewandowski missed a penalty as defender Gerard Pique ended his distinguished Barcelona career with a 2-0 win over Almeria.

Lewandowski blasted his seventh-minute spot-kick against the upright during a frustrating first half at the Nou Camp.

Pique, playing his final game for the club, forced goalkeeper Fernando Martinez into an early second-half save, but Ousmane Dembele’s 48th-minute strike finally broke the deadlock.

Javi Sanchez and Roque Mesa scored either side of half-time as Real Vallodolid beat Elche 2-1 with Josan replying for the visitors.

Chimy Avila’s first-half double was enough to secure a 2-1 win for Osasuna at Celta Vigo despite Iago Aspas’ equaliser.

Getafe’s Gaston Alvarez and Portu, and Cadiz’s Luis Hernandez were all sent off and the home side’s Enes Unal hit the post in stoppage time as a 0-0 draw came to a dramatic conclusion at the Coliseum Alfonso Perez.

Eric Choupo-Moting scored twice in as many minutes to edge Bayern Munich to the top of the Bundesliga table after a five-goal thriller at Hertha Berlin.

Choupo-Moting struck in the 37th and 38th minutes after Jamal Musiala had given the visitors the lead, but Dodi Lukebakio’s finish and Davie Selke’s penalty dragged Hertha back into it before the break, although they could not prevent Bayern from claiming an eighth successive win in all competitions.

Borussia Dortmund are just three points worse off in third after a 3-0 home win over Bochum.

Again, all the goals came in the first half with Youssoufa Moukoko finding the back of the net twice either side of Giovanni Reyna’s 12th-minute penalty.

Half-time substitute Ansgar Knauff was Eintracht Frankfurt’s match-winner as they came from behind at Augsburg to win 2-1.

Mergim Berisha’s first-minute opener got the home side off to the perfect start but Sebastian Rode levelled before the break to set up Knauff to claim the points after it.

Christopher Nkunku scored twice in RB Leipzig’s 3-1 win at Hoffenheim, while Patrick Wimmer, Maximilian Arnold and Ridle Baku were on target for Wolfsburg in a 3-0 victory at Mainz.

Goals from Niclas Fullkrug and Marvin Ducksch eased Werder Bremen to a 2-1 win over bottom-of-the-table Schalke, who scored a minute from time through substitute Dominick Drexler.

Serie A leaders Napoli had to come from behind at second-placed Atalanta to establish a six-point gap at the top of the pile.

Ademola Lookman had fired the home side ahead with a 16th-minute penalty after Victor Osimhen was deemed to have handled, but the striker made amends within seven minutes when he headed the visitors level before setting up Eljif Elmas to win it.

Olivier Giroud scored a dramatic late winner and was sent off for his celebration as AC Milan edged past Spezia 2-1 to go second.

Giroud picked up a second yellow card for removing his shirt while celebrating his 89th-minute decider after Daniel Maldini had dragged the visitors back into it following Theo Hernandez’s 21st-minute goal.

Substitute Daniel Ciofani snatched a point for struggling Cremonese at Salernitana as they fought back twice to draw 2-2.

In France, goals from Wesley Said and Facundo Medina wrapped up the points despite Miha Blazic’s late header as Lens cemented second place in Ligue 1 with a 2-1 victory over basement club Angers.

Trailing to early goals from Jean-Ricner Bellegarde and Kevin Gameiro, they responded in fine style through Mounaim El Idrissy, Youcef Belaili’s double from the spot and Riad Nouri before half-time, and managed to hang on despite Clement Vidal’s 79th-minute dismissal.