Shelbourne complete the double in FAI Cup triumph over Athlone 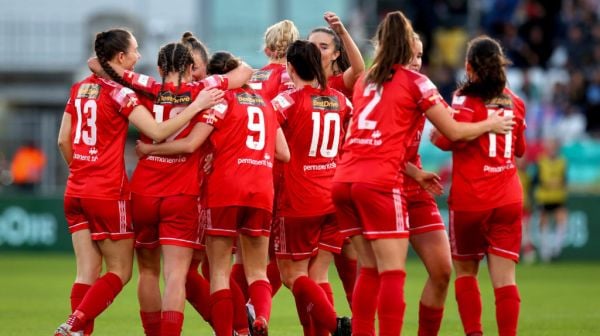 Shelbourne have been crowned FAI Cup champions following a 2-0 victory against Athlone Town in Tallaght Stadium, completing a league-and-cup double for the north Dublin outfit.

First half goals from Pearl Slattery and Jessie Stapleton sealed victory for Shels.

Athlone Town did have the ball in the net on the 70th minute through the head of Scarlett Herron, but it was called for offside.

Six minutes in, Alex Kavanagh’s free-kick was Athlone ‘keeper Niamh Coombes’ to collect but allowing the ball slip from her grasp was opportune for Jessie Stapleton to unwittingly benefit by deflecting it over the line off her back.

Nineteen minutes later and Megan Smyth-Lynch dropped a corner-kick inside the six-yard box, where Shauna Fox outjumped Coombes to send the ball spinning into the air. There to react in an instant was Reds captain Pearl Slattery, nipping in ahead of Kelsey Munroe to nod it over the line.

While Athlone rallied in the second half, and has a Scarlett Herron goal harshly disallowed for offside with 20 minutes left, Shels were comfortable throughout. Keeva Keenan’s cross early in the second half that deflected off the crossbar might have made their victory more convincing.

They won’t mind, for completed first double since 2016 before a record crowd of 5073 cemented their status as the best team in the country. As hawkers, especially new entrants Shamrock Rovers and their bulky budget, circle for their best players, the lure of their Champions League presence for another year should keep their core intact.

Underdogs Athlone had little answer to Shels’ first-half supremacy, hampered by stray passing. Maybe it was the occasion that got to the Midlanders after a season of overachievement earned them the runners-up places in both the league and Cup.

Keenan set the tone early for the champions by unleashing a volley that Coombes held.

Down the other end, Shauna Fox crowded out Emily Corbet on one of the few occasions Athlone’s top scorer got a clear run on goal.

Athlone were livid at referee Sean Grant for awarding the free for a foul on Smyth-Lynch that led to the breakthrough but they can’t complain about the suspect defending that followed.

In between the two goals, Muireann Devaney sliced wide and afterwards she should have been played in by Corbet for a clean strike but goalkeeper Amanda Budden was hardly worked.

It was well into the second half when their American attacker Maddie Gibson emerged as a threat, still unable to crown some darting runs with the finish to match. One chance saw her shoot on the stretch, with the effort sailing harmlessly wide.

It just wasn’t to be their day and Shels were worthy winners, illustrating the traits when under pressure which have been their hallmark during another season of distinction. How they deserved to celebrate with their band of fans, unworried about the aftermath this time.