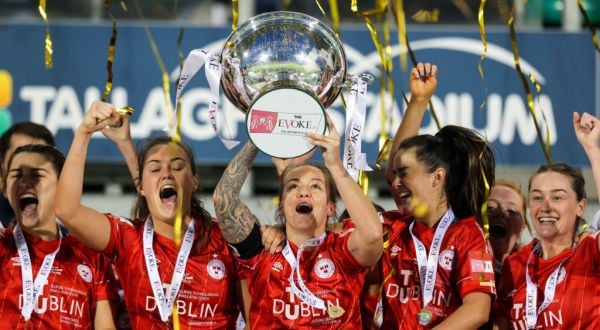 Shelbourne have been crowned FAI Cup champions following a 2-0 victory against Athlone Town in Tallaght Stadium, completing a league-and-cup double for the north Dublin outfit.

A mixup at the back allowed Jessie Stapleton to open the scoring for the Dublin women.

Then captain Pearl Slattery doubled the advantage just after 23 minutes of play.

Athlone Town did have the ball in the net on the 70th minute through the head of Scarlett Herron, but it was called for offside.

Derry City secured second place in the Airtricity League, despite losing out to Dundalk 1-0 in the Brandywell on the final day of the campaign.

Champions Shamrock Rovers closed out their season with 2-0 against UCD in Belfield. Aaron Greene and Simon Power got on the scoresheet for the Hoops.

Elsewhere, Bohemians closed out a forgettable season with a 3-1 victory over Sligo. Goals for the Gypsies came from Rory Feeley, James Clarke, and an OG from Éanna Clancy. Aidan Keena pulled one back for the visitors.

Finn Harps were already relegated before facing Drogheda in Head in the Game Park — Drogs piled on the woes, winning 2-0 thanks to an early Darragh Markey goal and a late one from Dayle Rooney.

Liverpool defeated Spurs 2-1 thanks to a first half brace from Mo Salah.

Arsenal are back on top of the Premier League after winning their London derby with Chelsea 1-0 at Stamford Bridge.

Mikel Arteta’s side have gone two points clear of champions Manchester City – who climbed to the summit yesterday.

Unai Emery’s off to a good start as Aston Villa’s new boss – with his side leading Manchester United 3-1 late on.

Newcastle thrashed Southampton 4-1 to strengthen their place in the Champions League spots.

The Waterford man is looking to build on his third round 63 last night which put him into fourth place on 15 under par.

He’s six shots off the lead.

All Ireland club champions Ballygunner have booked their place in the Munster hurling semi finals.

They were too much for Kilruane McDonagh’s of Tipperary in today’s quarter final action.

The Waterford side winning easily by 4-19 to 14 points.

Kilmacud Crokes are into the semi finals of the Leinster Senior Club Football Championship.

Craig Dias, Hugh Kenny and Dara Mullin with the goals for the Dublin side.

They’ll join Meath’s Ratoath and The Downs of Westmeath in the final four after they had wins over Offaly champions Rhode and St Mary’s Ardee in Louth respectively.

Laois’ Portarlington are also into the semi finals after a 3-19 to 9 point win over Palatine of Carlow.

They were no match for Tinahely of Wicklow as the Dublin champions took the crown by 4-15 to 8 points in Bray this afternoon.