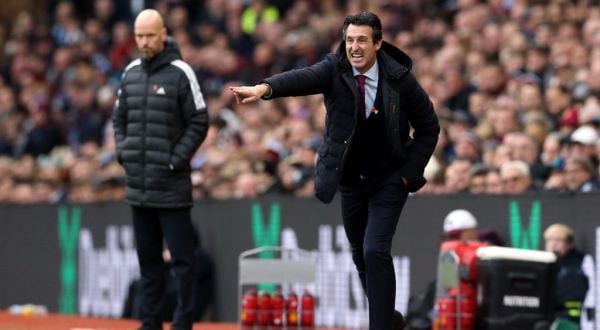 Unai Emery enjoyed a dream start to life in the Aston Villa dugout as irked Erik ten Hag admitted his meek Manchester United side deserved to lose in Birmingham.

Leon Bailey struck an early blow that Lucas Digne added to with an excellent free-kick in just the 11th minute, only for Jacob Ramsey to inadvertently deflect home a Luke Shaw strike at the end of the half to leave United trailing 2-1 at the break.

But the 21-year-old Ramsey struck a fine effort at the right end early in the second period to wrap up a 3-1 triumph as Emery ended Villa’s 23-match winless league run at home to United.

“I was dreaming it, I am so happy,” said the Spaniard, who oversaw Villarreal’s 2021 Europa League final win against the Red Devils.

“I think today the atmosphere was amazing with the supporters and I think we enjoyed it with them.

“We wanted to be organised, we wanted to be disciplined and I think being together with our game plan the players did it. It was a special game today here.”

Emery’s game plan involved his side keeping possession and breaking the high press of United, who his side travel to in the Carabao Cup on Thursday evening.

“They (Villa players) had confidence, they had good matches here,” the Villa boss said.

“My challenge here is to be consistent and to become regular in our way.

“Today I think it was so important against Manchester United after a long time we didn’t win, to do it. We did it but now it’s to keep it consistent in a regular way.

“We are going to play in Manchester on Thursday and Sunday in Brighton and our next challenge is going to be tough because this team didn’t keep the regularity in those matches away.”

United counterpart Ten Hag was visibly annoyed by his side’s display at Villa Park, where their nine-match unbeaten run in all competitions came to a tepid end.

The boss has had his say on today’s disappointing result.#MUFC || #AVLMUN

Asked if he felt his side deserved anymore, Ten Hag said: “No.

“You lose the game start of the first half, start of the second half. When you start a game like this you get beat.

“I think the free-kick is stoppable because the wall is too far. OK, small detail but details make a difference in top football.

“But it tells everything from us because we were not fresh.

“When you start the game, you always have the attitude and that was I think one of our best standards.

“We are really front foot, we are really ready to play in all the games until now. Today we were not from the start. Then you’re running behind the facts.

“We didn’t let them run, especially at the start of the game, we didn’t follow the rules in defending and we lost our battles.”

Ten Hag said the number of crosses sent in to stand-in skipper Cristiano Ronaldo during the first half was “stupid”.

But the United boss is not getting carried away by his side’s first defeat since the 6-3 derby mauling at Manchester City.

“I am disappointed but I know in the process it will not only go the way up,” he added. “Setbacks will come and we have to deal with that.”