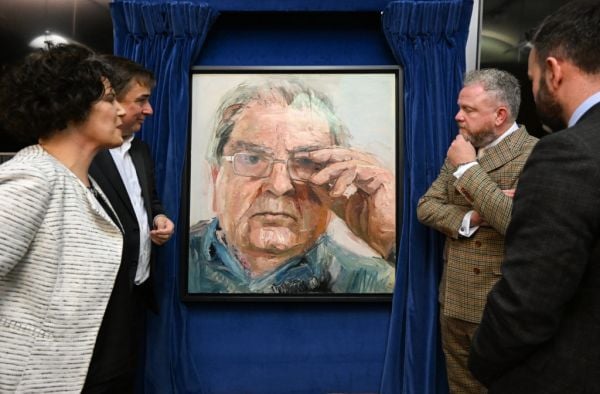 An official portrait of the late Nobel laureate John Hume has been unveiled at Westminster.

Painted by critically acclaimed Northern Ireland artist Colin Davidson, the portrait of the SDLP’s long-time leader is being hung in Portcullis House on the parliamentary estate.

It marks the contribution the peace process architect made during his 22 years as MP for Foyle.

The work was commissioned by the Speaker’s advisory committee on works of art.

Painted over a number of weeks at Davidson’s studio, it is based on sketches the artist made during sittings with Mr Hume in 2016 – four years before he died.

First elected to the Foyle constituency in 1983, Mr Hume was a leading figure in Northern Ireland’s civil rights movement.

In 1998, he was awarded the Nobel Peace Prize alongside David Trimble, the late leader of the Ulster Unionist Party, for their efforts to find a peaceful solution to the conflict in Northern Ireland.

Supported by wife Pat, Mr Hume’s work won him support across the political spectrum at home and abroad.

After a proposal from the SDLP MP for Belfast South, Claire Hanna, the Speaker’s advisory committee agreed to commission the portrait as a permanent addition to the parliamentary art collection to recognise Mr Hume’s role in promoting peace and reconciliation across Northern Ireland, Britain and the Republic.

“We are delighted that there will now be a permanent reminder of this work on display.”

Speaker of the House of Commons Sir Lindsay Hoyle said: “John Hume was one of the true giants of Northern Irish politics.

“An advocate for democracy across these islands and beyond, it was important for the House to ensure that Hume was finally represented in the collection.

“He was also one of the most important and impactful parliamentarians of his generation, and is greatly missed by colleagues and members both here in Westminster and in Europe.

“Colin Davidson has captured a wonderful likeness, and the committee and I are delighted to accept this work into the parliamentary art collection.”

Davidson began working on the posthumous portrait this year, and it was completed in the summer.

The painting is oil on a canvas measuring 37in x 40in – in keeping with the artist’s commitment to large-scale, impactful works.

Mr Hume is shown adjusting his glasses and focusing on the person looking at him.

Davidson first painted Mr Hume in 2016 as part of a private commission.

Sitting with the politician for more than two hours, he made a number of sketches as Mr Hume read stories from Silent Testimony – Davidson’s collection of portraits and stories of individuals affected by The Troubles.

The sketches formed the basis of the new composition for Parliament.

Davidson said: “Six years ago I was honoured to spend time with John Hume, drawing and sketching a man who had become a personal hero for me.

“Over the last year, I have revisited these drawings and created something new – a different portrait painting which, I hope, captures John’s focused vision and strength of character.

“John meant so much to so many people across these islands. We would not have peace in this part of the world without him, so it is appropriate that this new portrait of John Hume will hang in Westminster now for people to visit and hopefully draw inspiration from.

“I am grateful to both the committee – and of course the Hume family – for the privilege.”