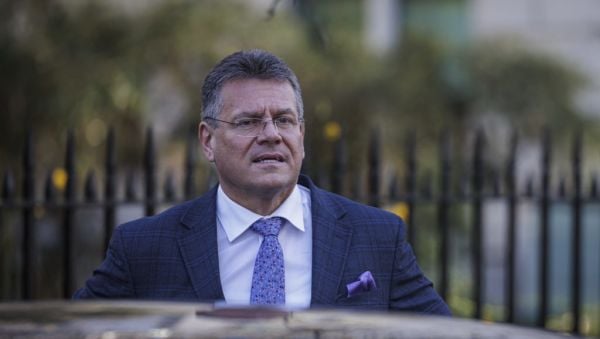 Maros Sefcovic has suggested that UK-EU agreement on checks between Great Britain and Northern Ireland could happen within weeks, with the right “political will”.

It comes as Rishi Sunak and Ursula von der Leyen agreed to “work together” to end the row over the Northern Ireland Protocol, when they met for the first time at Cop27 in Egypt.

Mr Sefcovic, the European Commission vice-president and Brexit negotiator, made the comments in Westminster during a meeting of British and European parliamentarians.

He said: “This is the area where we do not seek any political victory. We just want to solve the problem.”

Discussing EU proposals to reduce checks, he said: “Is it too much to do this? Can we not find pragmatic, technical solutions to make this thing work?

“I believe it could be done, if there is political will, I’m sure that we can sort it out really within a couple of weeks because really both sides of our negotiating teams we know these topics from all angles.”

Earlier, Mr Sefcovic told parliamentarians that he did not believe the EU and the UK were “worlds apart” on the protocol, as he warned that unilateral action by the UK government would have “serious” consequences.

In Egypt, the new British prime minister met the European Commission president as both attended the Cop27 climate conference on Monday, with Mr Sunak stressing the need to “find solutions” to the “very real problems” caused by the post-Brexit arrangements in the region.

Mr Sunak inherits from his predecessors Liz Truss and Boris Johnson the problem of the Northern Ireland Protocol, which is vocally opposed by unionists who claim it cuts off the North from the rest of the UK.

We face many common challenges, from tackling climate change and the energy transition to Russia’s war against Ukraine.

I look forward to a constructive 🇪🇺🇬🇧cooperation based on our agreements. pic.twitter.com/TeInbLKVSn

The post-Brexit solution, designed to avoid a hard border on the island of Ireland, is cited as the Democratic Unionist Party’s main reason for refusing to return to powersharing.

The instability in Northern Ireland has raised concerns in Dublin, Brussels and Washington, and the row between the UK and the EU shows few signs of coming to a rapid conclusion, despite indications of a more positive tone from the British side in recent weeks.

“We face many common challenges, from tackling climate change and the energy transition to Russia’s war against Ukraine,” she tweeted.

She said she looked forward to “constructive co-operation” between the two countries.

In London, Europe Minister Leo Docherty spoke for the Government at a meeting of the UK-EU parliamentary partnership assembly and told a roomful of European and British politicians that it remained the UK’s “preference to resolve this through talks”.

“We are engaging in constructive dialogue to find solutions,” he said.

There, he hit out at the EU’s decision to deny British access to research programmes such as Horizon, accusing the bloc of failing to fulfil its part of the agreement.

“It brings no conceivable disadvantage to the EU or its member states, but the EU has politicised scientific co-operation by linking it with the Northern Ireland Protocol,” he said.

“Putting politics in the way of scientific collaboration constrains human potential and hurts everybody.”

“It is going through its normal course through the legislative procedure.”

“We’re not expediting it, but we’re not halting it. We’re just letting it go forward as it would.”

Mr Sefcovic did offer warm words for the progress made in recent weeks with Foreign Secretary James Cleverly as EU-UK talks restarted.

But he had a stark warning about the consequences of the UK pushing ahead with plans to rip up the protocol, saying the proposals put forward between the two sides to solve the issues in Northern Ireland are not fundamentally different.

He said: “This is surely the moment to abandon recourse to unilateral action, such as the Northern Ireland Protocol Bill.

“Unilaterally disapplying core parts of the protocol would also have serious consequences for our trade relationship under the Trade and Co-operation Agreement.”

He said that any “additional or persistent uncertainty” would not help amid a cost-of-living crisis, as he urged progress ahead of the 25th anniversary of the Good Friday Agreement next year.

Pointing to UK’s idea of a “green lane”, he contrasted it with EU proposals.

He said: “The issue here boils down to ‘no checks’ versus ‘minimum checks’, stemming from Brexit itself. Because we must acknowledge that Brexit did fundamentally alter trade on the island of Ireland.

“I believe that our respective positions are not worlds apart if we genuinely explore the EU’s robust proposals.”

Downing Street on Monday said it was not pursuing any specific timeline on talks over the Northern Ireland Protocol, in response to Mr Sefcovic’s comments.

The prime minister’s official spokesman said: “We’re not working to a set timeline on those sorts of discussions.

“Obviously we do want to come up with a negotiated solution, we do think the issue is urgent and needs resolving, and obviously we would welcome any progress made.”