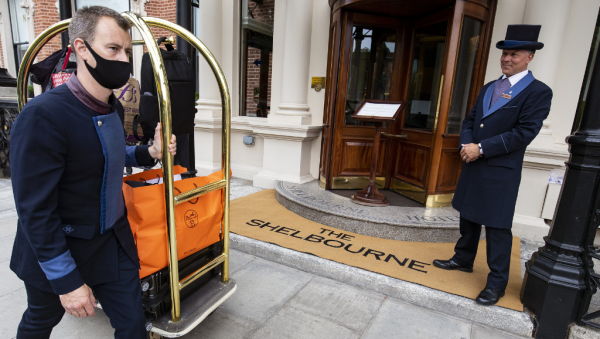 Pre-tax losses at the operator of the five-star Shelbourne hotel on Dublin’s St Stephen’s Green last year declined by 43 per cent to €4.88 million as the hotel began to recover from the impact of the Covid-19 pandemic.

The Shelbourne firm’s 2021 revenues still remain some way from the hotel’s pre-pandemic revenues of €42 million in 2019 and the 2021 revenue increase was also far short of the revenue gains made last year by 5-star hotels on the west coast, as the Dublin luxury hotel market largely missed out on the 2021 ‘staycation’ dividend.

The 20 per cent revenue gain made by the Shelbourne compares to revenues last year increasing by 68 per cent by the operator of the five-star Dromoland Castle and to the 60 per cent revenue increase enjoyed at Ashford Castle in 2021.

The hotel industry across the country was able to open from early June last year after Covid-19 had shut down the sector for the first five months of the year.

The directors for the Shelbourne hotel firm state that since year-end “domestic trade has been robust and the return of international guests has commenced”.

The directors state that they remain confident that the company “will return to a strong trading position as international guests return to pre-pandemic levels and functions can return to full attendance”.

The directors state that “throughout all closures, maintenance and other essential work was carried out which is usually difficult to achieve under normal trading conditions”.

The accounts disclose that the owner of the hotel, connected KW entity, KW Irish Real Estate VII granted a lease concession to forgive part of the rental payments agreed in an August 2019 rent review in light of the Government enforced closure of the hotel due to Covid-19.

In 2014, US real estate specialists, Kennedy Wilson assumed control of the hotel when it paid €110 million for the debts attached to the property.

The staff costs for the operation of the hotel are borne by a separate company, Torriam Hotel Operating Company Ltd which has a contract to manage the hotel until 2026.

At the end of December last, KW Shelbourne Ops Ltd had accumulated losses of €1.91 million.