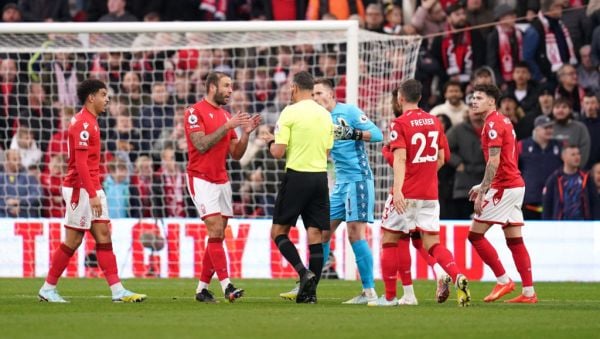 Steve Cooper refused to play the blame game and insisted Nottingham Forest must forget their frustrations over recent decisions that have gone against them.

Forest host Tottenham in the Carabao Cup on Wednesday after a controversial 2-2 draw with Brentford on Saturday.

The Premier League strugglers were fuming after the Bees were awarded a spot kick for Dean Henderson’s challenge on Yoane Wissa while a number of other penalty calls were ignored by referee Andre Marriner.

Cooper remains irritated but believes he cannot give any more time to his complaints.

He said: “It went against us but I also have to focus on the two goals we conceded and the fact we should have been two or three up in the first half.

“If I sit here and talk about being hard done by that’s not the right message to the players. We’re not in a great position in the league but I don’t want excuses or blame, I want us to look at ourselves and how we can do better.

“The stuff out of our control hopefully, over the course of time, will even itself out.

“I don’t want to be that guy who, in our position, comes in and moans about decisions when we have to make sure we do our bit as well as we can. If I give it too much air time talking about decisions that’s not right for the club.”

Morgan Gibbs-White claimed the hosts were cheated, comments the Football Association is expected to take a dim view on, but Cooper focused on the forward’s performance after his first Forest goal.

He said: “Any conversations I have with players will remain private. My only feeling with Morgan is how well he played. Hopefully it’s the start of a few more goals.

“I was really pleased with Morgan’s performance. I thought he was the best player on the pitch. It was great for him to get his first goal.”

Cooper also declined to comment on an altercation between Brentford’s goalkeeping coach Manu Sotelo and a member of the Forest groundstaff.

Bees boss Thomas Frank alleged Sotelo has marks on him after an argument before kick-off.

The PA news agency understands Forest conducted an early investigation and deemed Brentford to be at fault for breaching Premier League rules about how long teams can use the penalty area for during the warm-up.

The member of the groundstaff, who is understood to have felt threatened, went on to the pitch to move them on, but disrupted a drill.

“I’ve been asked by the club to stick to football matters,” added Cooper. “Anything which is commented on will come from a higher place than me.

“I’m aware something went on and there was an internal investigation but the ins and outs of that I’m not too privy to.”