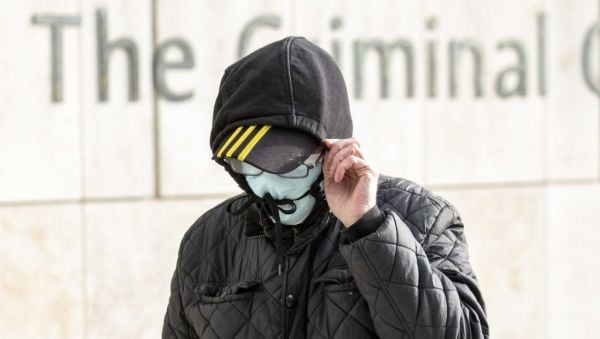 A taxi driver accused of participating in the murder of Kinahan Cartel member David Byrne said “thank God” when gardai arrived at his house to tow his car two weeks after the shooting and blessed himself, the Special Criminal Court was told today.

Garda witnesses also told the court of being informed that defendant Paul Murphy was suspected of having driven one of the gunmen away after the Regency Hotel attack.

The three-judge court also heard that a mobile phone registered to Mr Murphy was turned off between 1.20pm and 3pm on the day that Mr Byrne was shot dead which detectives believed was “unusual” in comparison to the “normal usage” of the accused’s mobile device. The court has heard that the attack at the hotel began at 2:28pm that day.

Mr Hutch’s two co-accused – Paul Murphy (61), of Cherry Avenue, Swords, Co Dublin and Jason Bonney (50), of Drumnigh Wood, Portmarnock, Dublin 13 have pleaded not guilty to participating in or contributing to the murder of Mr Byrne by providing access to motor vehicles on February 5th, 2016.

Sean Gillane SC, prosecuting, said in his opening address that “an integral part of the operation” which led to Mr Byrne’s death was the means by which the tactical team escaped, which is central to the case of Mr Bonney and Mr Murphy.

Detective Sergeant Alan McGovern told Mr Gillane on Monday that he was on duty as member in charge at Ballymun Garda Station on the evening of May 30th 2016, when Detective Sergeant Brian Hanley arrived with Mr Murphy. “He told me that Paul Murphy is the registered owner of a gold green Toyota Avensis and that it was suspected that he transported in his taxi a number of participants in the murder to Buckingham Village on the morning of February 5th, 2016,” he said.

The witness said that Det Sgt Hanley also informed him that Mr Murphy had previously admitted to being the sole driver of the taxi on that date. “He also said that three vehicles had left Buckingham Village in convoy and that the taxi was part of the convoy. Also in convoy was a silver Ford Transit van believed to be used in the murder,” he outlined.

Det Sgt Hanley had also told the witness that Mr Murphy had parked outside the Beachcomber Pub at 1.22pm on February 5th and that the taxi joined up with a convoy including a BMW believed to be driven by his co-accused Mr Bonney. A black Skoda taxi was part of the convoy and the three vehicles went to St Vincent’s GAA grounds in Marino, he added. “Det Sgt Hanley said Mr Murphy took away the gunman from that area,” he added.

Det Sgt McGovern also testified that Det Sgt Hanley said a mobile phone registered to Mr Murphy was turned off between 1.20pm and 3pm on February 5th, which “appeared to be unusual in comparison to the normal usage of his mobile phone”.

Chief Superintendent Finbar Murphy testified that he had a telephone conversation with Det Sgt Brian Hanley regarding the arrest of Mr Murphy at 5.58pm on May 30th, 2016. The witness said Det Sgt Hanley had outlined that Mr Murphy had been the driver of a light-green Avensis car which was seen prior to the murder of Mr Byrne at the Regency Hotel, that he had driven in convoy to St Vincent’s GAA grounds in Marino and that he had driven “one of the assassination or assailant team” after the shooting from the gaelic grounds in that car.

Now retired Detective Garda William Armstrong told Mr Gillane that he was driving an unmarked official garda vehicle on February 19th 2016 when he arrived at Cherry Avenue in Swords.

He said he observed a Toyota Avensis parked on the roadway and he believed at the time that the vehicle was sought for the murder of Mr Byrne at the Regency Hotel.

The witness said he asked Mr Murphy if he owned the Avensis vehicle and the accused indicated that he did. Mr Murphy then removed the key for the Avensis from a bunch of keys and handed the key to the witness. Mr Armstrong informed Mr Murphy that the vehicle was being seized, that it would be towed and taken to a secure location for forensic examination.

Mr Murphy asked the witness if it would take long and Mr Armstrong said he did not know. Mr Armstrong did not examine or search the vehicle.

Mr Byrne, from Crumlin, was shot dead at the hotel in Whitehall, Dublin 9 after five men, three disguised as armed gardaí in tactical clothing and carrying AK-47 assault rifles, stormed the building during the attack, which was hosting a boxing weigh-in at the time.

The victim was shot by two of the tactical assailants and further rounds were delivered to his head and body.