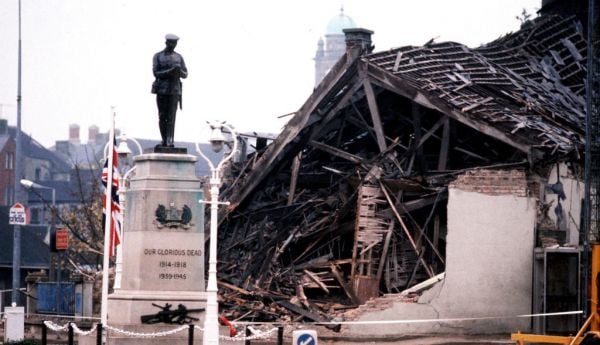 An act of remembrance has taken place in Co Fermanagh to mark the 35th anniversary of the Enniskillen bombing.

The town was devastated on November 8th, 1987 when a Provisional IRA bomb attack turned the annual Remembrance Sunday event into an atrocity.

Eleven people were killed and more than 60 were injured in the blast.

A twelfth victim, Ronnie Hill, died from his injuries after 13 years in a coma.

Relatives of those killed and members of the public gathered at 10.43am, the exact time of the explosion on November 8, 1987, to remember their loved ones.

The event took place at a newly installed memorial in the town.

Chair of Enniskillen Memorial Remembrance Group Stella Robinson, whose parents Wesley and Bertha Armstrong were killed in the bomb blast, said it is very important that what happened is remembered.

“My father loved his church, his church came first, my mother was very family oriented, she was a great mum, like our best friend, we miss them, we really do,” she said.

“It’s a pain we carry with us all the time, and it never goes away.”

No-one was ever convicted for the bomb attack.

Relatives of those killed have made a fresh appeal for anyone with information that could help the police investigation to come forward.

A remembrance service is set to take place later at Enniskillen Presbyterian Church.