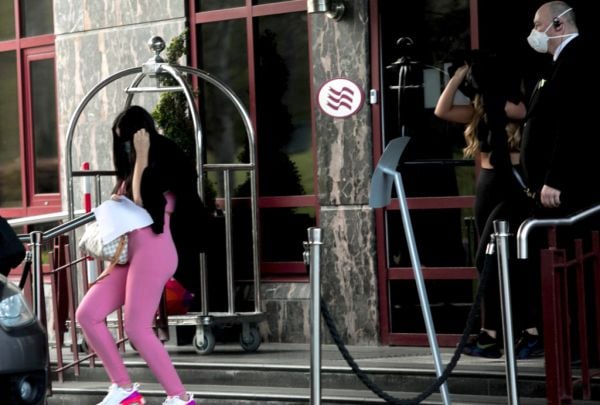 Two Dublin women who were arrested by gardaí after they refused to quarantine at a hotel when they returned to Ireland following a holiday in Dubai in 2021 have argued before the High Court that they should not be prosecuted for alleged breaches of Covid-19 rules.

The actions have been brought by Niamh Mulreany (26) and Kirstie McGrath (31) who were arrested at Dublin Airport on Good Friday, April 2nd, 2021 on their return from the United Arab Emirates, where they originally intended to have cosmetic surgery.

On their arrival back to Ireland they and most other passengers travelling to Ireland from certain designated countries, which at the time included the UAE, were required to undergo mandatory quarantine at a hotel for up to 14 days.

The measures which have since been discontinued, were brought into to help prevent the spread of the virus.

Both women refused to go to the hotel claiming that they could not afford the cost of stay, which was estimated at over €1,800 each, and because the needed to get back to their children.

They claim they had only had child minding arrangements in place for the time they were in Dubai.

Arising out of their refusal both have been charged with breaches of the 1947 Health Act, and if convicted face fines of up to €2,000 and a period of several months’ imprisonment.

They claim that the charges against them are unconstitutional and that their trials should be halted.

Represented by Micheal Ó Higgins SC, the two women have brought judicial review proceedings against the DPP, the Minister for Foreign Affairs, The Minister for Health, Ireland and the Attorney General.

In their actions they seek various orders including one halting their prosecutions, and a declaration that the offence of resisting being taken to a designated quarantine facility is invalid.

They also seek various declarations from the courts including that certain provisions of the 1947 Health Act are invalid, unconstitutional and are contrary to the European Convention on Human Rights. They further seek damages against the respondents. The State respondents oppose the action.

Opening the case Mr O’Higgins said that in late March 2021 his clients, who are friends, went on holiday to Dubai to celebrate “landmark birthdays” that had been paid for by their relatives and friends.

Initially they had intended to undergo cosmetic surgery procedures in the UAE, but ultimately did not go through with the planned procedures.

Counsel said that Ms McGrath of St Anthony’s Road, Rialto Dublin 7 and Ms Mulreany Scarlett Row, Essex Street West, Dublin 2 are lone parents, and their children were being cared for by their relatives while they were on holiday.

After they left Ireland, the State introduced new Covid-19 quarantine requirements which stipulated that most persons arriving from certain states, including the UAE would have to quarantine at designated hotels for a period up to 14 days. Counsel said that the requirements delayed their return to Ireland.

Despite testing negative for the virus when they did return, they refused to get on a bus taking them to a designated hotel quarantine in Dublin.

Both women were arrested and charged with breaching Section 38 of the Health (Amendment) Act 2021 due to their refusal to go the designated hotel.

They were granted bail by the District Court the day after their arrest but were unable to take it up because they could not afford it.

They were detained at Mountjoy women’s prison.

They secured bail, when the cash lodgement was reduced from €1800 to €500 following a High Court hearing on Easter Sunday, April 4th, 2021.

They were released from prison and were taken to another hotel where they remained in quarantine for several more days.

Counsel said that his clients’ cases had attracted a lot of attention and had resulted in the applicants being the subject of “a lot of adverse comments on social media”. He said that when at the hotel they engaged in the state’s appeal process during their detention. However, their appeal process was refused.

Counsel said that their action against the State centres around two key grounds. Counsel said the Minister for Health’s designation of certain states, as places from where persons who travel to Ireland from had to undergo mandatory periods of quarantine breached the separation of powers, the principle of law and was unconstitutional.

Such a measure should have been introduced by way of legislation through a statutory instrument and not by way of a Ministerial order, counsel said.