Farmer (63) jailed for brutal assault on neighbour in Monaghan 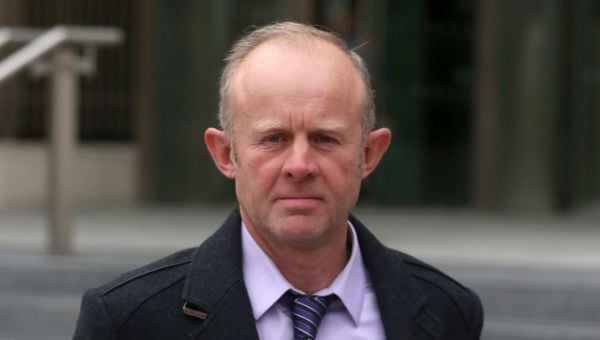 A farmer has been jailed for three years for a brutal and “premeditated” assault on his neighbour in Monaghan 10 years ago.

Eugene Hanratty Snr (63) of Castleblayney Road, Crossmaglen, Armagh was convicted by a jury following a trial in October. He had pleaded not guilty to assault causing harm at Castleblayney, Co Monaghan on November 24th, 2012.

Detective Garda Paul Everard told Garrett McCormack BL, prosecuting, that on the Saturday afternoon of the attack, Martin McAllister and his wife were driving at 4.20pm in Castleblayney on their way to Crossmaglen when a vehicle approached with its full headlights on.

Mr McAllister told the trial that he felt his path was blocked by the other vehicle and he couldn’t drive past it. He then recognised the occupants of the car as being father and son, Eugene Hanratty Snr and his son Eugene Jnr.

The defendant got out of his car and began an assault on Mr McAllister in his vehicle, the trial heard. The victim said that Hanratty punched him a number of times in the head, pulled him down by the hair and kicked him before the defendant dragged him out of the vehicle.

Mr McAlister told the trial that the assault continued outside the car, with Hanratty continually kicking him while he was on the ground. His right arm was stamped on and he went in and out of consciousness.

He testified that Hanratty Snr was aware he was a musician, so he felt the stamping on his arm was significant in this regard.

Det Gda Everard said that the victim’s wife Mary McAllister told the jury that it was a sustained attack while her husband was both inside the car and out of the car.

She described asking Hanratty Snr to stop because she was concerned if the assault continued the injuries would be fatal for her husband. The trial heard that Hanratty Jnr also asked his father to stop attacking the man.

Sentencing on Tuesday, Judge Melanie Greally said that the jury rejected Hanratty’s defence of justified use of force which maintained that the violence arose as a result of a physical altercation following a dispute in relation to duck shooting rights on local lands.

She said the court was sentencing Hanratty on the basis of no information of any long-standing history between the parties and treating the assault as unprovoked and pre-meditated.

She said the aggravating factors included this clear pre-meditation, the severity and brutality of the violence, the fact that most of the blows, including kicks, were directed at the victim’s head and face and the fact that Hanratty stamped on the victim’s arm knowing the victim is a musician.

She said she also took into consideration the adverse effects of the assault on the quality of life of the victim and his family and the fact that the assault was carried out in front of the man’s wife.

She set a headline sentence of five years, which is the maximum penalty for the offence.

Judge Greally then noted as mitigating factors Hanratty’s lack of any recent convictions and the fact that this type of “extreme violence” was entirely out of character.

She noted his otherwise good character and his positive contributions to his family and his community and said he was a hard-working “hands on” farmer.

‘Pillar of the community’

Padraig Dwyer SC, defending, had earlier submitted that his client was “a pillar of the community” who contributed to local community activities including the church and the GAA. He said while his client does not accept fully the jury verdict, he does accept he did act and used excessive violence on the day.

Taking all these mitigating factors into consideration, she set a sentence of four years and suspended the final year on condition that he have no contact with Mr McAllister or his family for the next decade.

The conviction last month came after the third trial in the case. The first trial resulted in a disagreement and the jury couldn’t reach a verdict, the second trial collapsed after the jury was discharged. Last October the jury unanimously convicted Hanratty Snr following one-hour deliberations.

Hanratty Snr has two previous convictions; one for assault of a garda in 1989 and one for criminal damage in 1997, the court heard. He has not come to garda attention since the 2012 assault.

In October 2016 another jury at Dublin Circuit Criminal Court acquitted Eugene Hanratty Junior (41) Dundalk Road, Crossmaglen, Armagh of assaulting Mr McAllister causing him harm. It was the State’s case that he had not taken part in the physical beating, but he was charged on the basis of joint enterprise.