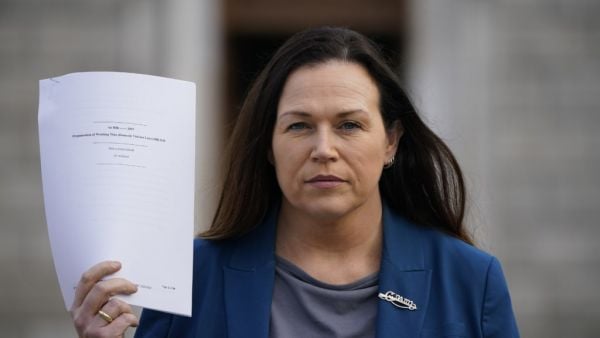 A Sinn Féin TD has criticised the government for not providing domestic violence victims to an entitlement of 10 days of paid leave.

Louise O’Reilly said it is a “failure” that domestic violence survivors will not have the statutory entitlement of 10 days.

On Tuesday, the proposed domestic violence leave was introduced at committee stage in the Dáil, taking it a step closer to becoming law.

The proposed legislation will allow victims of domestic violence to take up to five days of paid leave.

It forms part of the proposed Work Life Balance Bill, and is part of the Government’s plan to bring the EU’s work-life balance directive into Irish law.

But Ms O’Reilly has criticised the government for not delivering 10 days’ paid leave.

The Dublin Fingal TD had tabled her own private bill that allow victims to take 10 days’ leave from their employment.

The Sinn Féin spokeswoman on enterprise, trade, and employment said the decision urged the government not to push through what she described as “flawed and unsuitable” legislation.

“I am deeply disappointed that the government today insisted on going ahead with a number of deeply flawed amendments which will fail survivors of domestic violence who require paid leave from work,” Ms O’Reilly said.

“This decision is inexplicable and flies in the face of best practice and expert advice.

“I am urging the government to do the right thing and stop attempting to push through this flawed and unsuitable legislation.

“Since the publication of the Work Life Balance and Miscellaneous Provisions Bill, the Minister for Children, Equality, Disability, Integration and Youth, Roderic O’Gorman has been criticised by politicians, stakeholders, and trade unions for not going far enough with proposals to support victims of domestic violence.

“Clearly aware of the flaws in his legislation the Minister brought forward a number of amendments to the Bill today.

“However, his amendments have only solidified problematic aspects of the Bill. This is especially true of Minister O’Gorman’s failure to deliver 10 days’ paid domestic violence leave for victims.

“Instead, the minister’s amendments only grant five days’ leave for victims in limited circumstances. This is insufficient and totally fails victims.

“Domestic violence leave is intended to facilitate victims in accessing supports and completing their journey to safety, and five days’ leave is not enough in this regard.

“Ten days’ paid leave would enable victims to take the time they need to seek support, find accommodation, find new schools for their children, open a new bank account, attend court, or undertake any multitude of things they may need to do during such a traumatic time.

“Providing only five days’ leave will also create a two-tier system in the public service where 10 days’ domestic violence leave is already the norm in many agencies and institutions.”