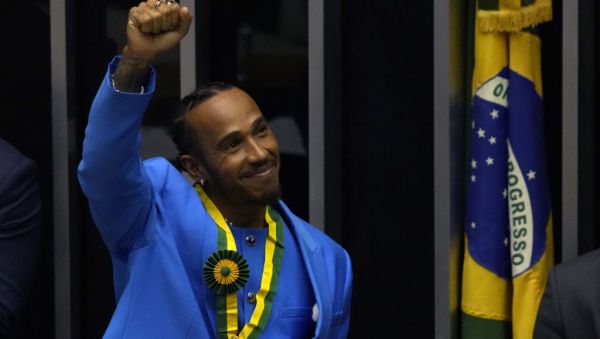 Lewis Hamilton has become an honorary citizen of Brazil following a ceremony in Brasilia on Monday.

The seven-time Formula One world champion traces his desire for motor racing back to watching Brazilian great Ayrton Senna during his youth.

Last year following his victory at the Brazilian Grand Prix, the Englishman completed an additional lap while holding the Brazil flag – mimicking Senna at his home race in 1991.

It was that gesture which helped see Hamilton, 37, bestowed with the honour by the president of the chamber of deputies, Arthur Lira, ahead of this weekend’s race at Interlagos.

“When I was five years old, I saw Ayrton race for the first time, and that was the moment when I knew I wanted to be world champion,” Hamilton said at the event.

“Many people said it was impossible, but fortunately, the fact that I’m here today is proof that persistence and hope can make everything possible.”

Hamilton, born in Stevenage, is currently fifth in this season’s drivers’ championship and has won the Brazilian Grand Prix on three occasions.