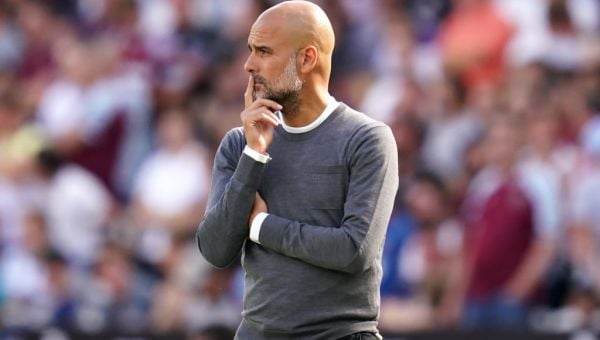 Pep Guardiola says Manchester City will not be strengthening their squad in the January transfer window.

The Premier League club on Monday reported record revenues and profits for 2021-22, of £613million and £43.2m respectively.

Guardiola was asked at a press conference on Tuesday about that and the financial backing of the owners standing City in good stead should they need to bring in players in the next window.

But City’s manager said: “We are not going to strengthen the squad in January. We have the squad we have, we are pleased with that, that is all.”

Guardiola – whose side are two points behind leaders Arsenal in the Premier League and will play RB Leipzig in the Champions League last-16 – was also keen to stress that City chief executive Ferran Soriano is “the boss” on the club’s financial matters.

And when he was asked if he was surprised by a statement on Monday from Liverpool’s owners Fenway Sports Group saying it would “consider new shareholders if it was in the best interests” of the club, he said: “I’m not the person to ask this question, I’m not the right one to answer you.

“I’m not a CEO, I try to be as good a manager as possible, that’s all. And of course I’m not going to talk about the other clubs.”

Guardiola was speaking ahead of Wednesday’s Carabao Cup third-round tie against Chelsea at the Etihad Stadium, City’s penultimate match before the World Cup that takes place from November 20 to December 18.

Should City get through, the next round is set to take place in the week commencing December 19, and Guardiola, giving a smile, said of that decision: “(It is) to support the academy, so it’s a good idea.

“Always thinking about the future for English football, of course.”

Guardiola had said after Saturday’s 2-1 league victory over Fulham that midfielder Kalvin Phillips, sidelined following a shoulder operation in September, would make a return to the matchday squad on Wednesday as a substitute.

That was something he reiterated on Tuesday, as well as confirming that right-back Kyle Walker, who has been recovering after undergoing groin surgery last month, would not be involved.

Phillips and Walker have both been in a race against time, with Gareth Southgate set to name his England squad for the World Cup on Thursday.

Saturday’s match saw City Erling Haaland, having missed the last two games due to illness and a foot injury, come off the bench and score the winner with a stoppage-time penalty, his 23rd goal of the season.

Haaland’s Norway have not qualified for the World Cup, but do have two friendlies after the weekend.

And Guardiola said: “He’s not perfect still. So we’ll see tomorrow, Saturday (when City host Brentford). But it’s getting better.

“It’s important the bone is not broken, just the ligament was damaged a little bit. So it’s not perfect right now, but I don’t know, in one week, 10 days, everything can happen. It can change.

“If he feels good, playing in the national team is so important for the players.”