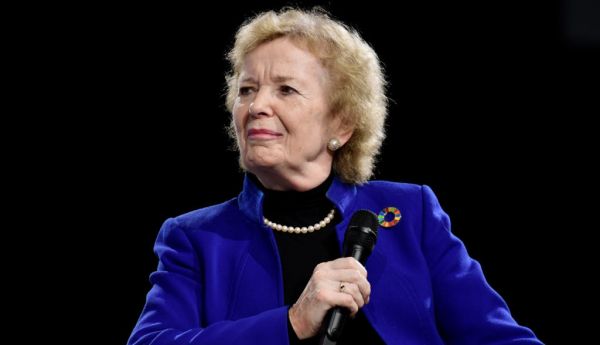 Ms Robinson told RTÉ’s Morning Ireland that the war in Ukraine had slowed climate action progress as EU countries had to replace gas supplies from Russia with gas from elsewhere.

She also said the World Bank and the International Monetary Fund should provide “solidarity funding” for developing countries who were struggling with energy supply and climate action.

Delegates at the Cop27 climate summit in Egypt are expected to focus on financing issues on Wednesday.

The former president, who is also chair of The Elders, an independent group of global leaders working for peace, justice and human rights, called for a “positive narrative” on climate action. “We need to get over this hump” to pursue global green energy, she said.

When asked if developing countries should have the right to extract their fossil fuel reserves, Ms Robinson said the anger of African leaders was understandable, but it made the case that clean energy was the way forward. Using fossil fuels would “hurt African countries sooner and worse”, she warned.

Her comments come as a report published on Tuesday said developing countries need to work with investors, rich countries and development banks to secure $1 trillion (€1 trillion) a year in external financing for climate action by the end of the decade and to match that with their own funds.

The report said the funding was required to cut emissions, boost resilience, deal with damage from climate change and restore nature and land.

“The world needs a breakthrough and a new roadmap on climate finance that can mobilise the $1 trillion in external finance that will be needed by 2030 for emerging markets and developing countries other than China,” said the report, commissioned by the current and previous climate summit hosts, Egypt and Britain.

It said the total annual investment requirement of developing countries would hit $2.4 trillion by 2030, with half coming from external financing and the rest from public and private sources in those countries.

Current investment stands at around $500 million, it said.

The biggest increase should come from the private sector, both domestic and foreign, while annual flows from development banks should be tripled, it said. Concessional loans, which offer more favourable terms than markets, should also be stepped up.

“Unlocking substantial climate finance is the key to solving today’s development challenges,” said Vera Songwe, one of the report’s authors.

“This means countries must have access to affordable, sustainable low-cost financing from the multilateral development banks to help crowd in investments from the private sector and philanthropy.”

The report also calls for grants and low-interest loans from the governments of developed countries to double from $30 billion annually today to $60 billion by 2025. – Additional reporting: Reuters