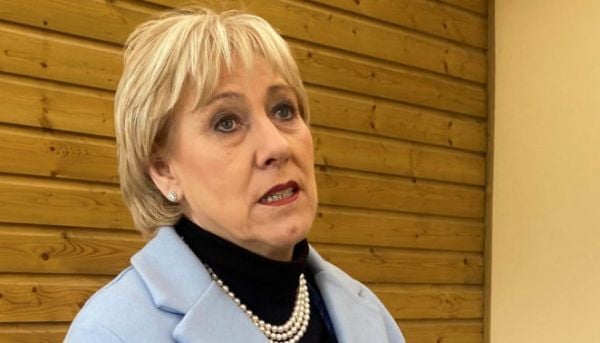 The Minister for Social Protection has said she is “very concerned” by Sinn Féin leader Mary Lou McDonald’s comments “regarding different degrees of murder”.

Heather Humphreys described Mrs McDonald’s remarks as “terrible”, adding that many people had been hurt by them.

The ministers made the comments at the launch of the Government’s Dormant Accounts Action Plan 2023 in Dublin on Tuesday.

Mrs McDonald told Newstalk on Sunday that there is no comparison between the IRA and gangland criminals.

Speaking at the Cherry Orchard Equine Centre, Ms Humphreys, TD for Cavan-Monaghan, a border constituency, said: “I was very concerned when I heard the comments from Mary Lou McDonald regarding different degrees of murder.

“So she was sort of saying that an IRA murder is something different to a gangland murder in Dublin.

“That concerns me seriously, really, because I have lived on the border region all my life.

“And I can tell you… when you talk to Breege Quinn, her son was a victim of an IRA murder. When he was beaten to a pulp, where his mother couldn’t even put the rosary beads in his hand he was so badly beaten by those criminals.

“And as I said it was an IRA murder at the time. You ask her does she feel any different than a family that has been impacted by a gangland murder in Dublin.

“Does the family of Columba McVeigh feel any different where he is buried in a bog in Bragan where he was murdered as a young man?

“There are many other instances of that. Or ask the wife of the late Garda Jerry McCabe. How does she feel about that?

“That was a terrible thing to say and a lot of people have been hurt by it.”

Speaking on Newstalk’s On The Record With Gavan Reilly, Mrs McDonald said: “The things that happened in the course of a very long political conflict – which, thank God, is now long over, we’ve had 25 years of peace – there is no comparison between that and the kind of challenge, and it is an ongoing challenge, to our society between this and the so-called gangland crime epidemic poses.”

Junior Sport Minister Mr Chambers accused Sinn Fein of trying to “sanitise” the past and “retraumatising” people in the process.

He said the party was creating “some sort of new complex around what the degree of murder should be”.

“Clearly Sinn Féin are trying to sanitise their past,” Mr Chambers said.

“They’re trying to dismiss their past as across some conflict.”

He added: “The sanitisation of the past puts us, it damages bridge-building across our island, it undermines a pathway to having a shared island, and it’s about bringing people together.

“And instead of seeking forgiveness for the murder and mayhem they caused in the past, they retraumatised many families over recent days, and it’s very concerning to see the leader of Sinn Féin underpin that in her comments in the last couple of days.”

Mr Chambers also said he would be “still very concerned” about Sinn Féin having “any sort of input or role when it comes to matters related to criminal justice” if the party were to come to power.