More than 100,000 patients left waiting on trolleys at hospitals this year 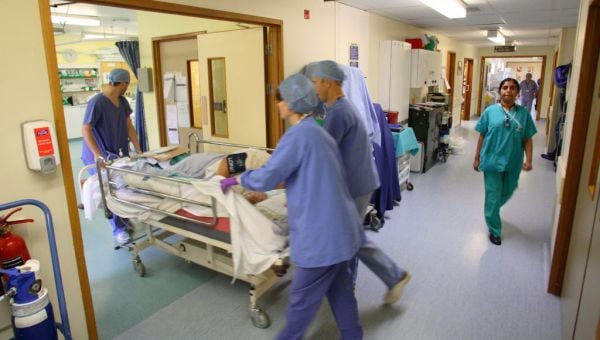 More than 100,000 patients have gone without beds in Irish hospitals so far this year.

The Irish Nurses and Midwives Organisation (INMO) has called for the Government to bring in measures needed to retain nurses and midwives to help address the crisis.

In analysis released on Tuesday, the INMO said more than 1,903 children have been waiting on trolleys.

This is the earliest in the year that this high number of admitted patients has ever been recorded, according to the INMO.

The INMO has been warning of unprecedented overcrowding in 2022 since early summer.

The trade union has called for a four-pronged approach to tackle overcrowding and the recruitment and retention crisis.

It wants non-urgent elective care to be cancelled in public hospitals and private hospitals used for this work.

It calls for the introduction of retention measures, including provision of accommodation for essential workers such as nurses and midwives – particularly in rent pressure zones.

The union has also called for legislation to underpin the implementation of the safe staffing and skill mix framework, and the prioritisation of funding for publicly delivered long-term care in the community.

INMO general secretary Phil Ni Sheaghdha said: “This is the earliest in any given year that trolley figures have reached this unacceptable level.

“It is not good enough that nurses and the patients they are trying to provide safe care to are expected to accept this as normal.

“Senior figures in the health service have warned the Irish public that waiting over 24 hours to be admitted to hospital is the new normal. In no other country would this level of indignity be accepted.

“Behind our trolley figures that we publish every day are vulnerable patients trapped in undignified and unsafe conditions.

“Our members are working incredibly hard, it is clear that our public health service can no longer provide both emergency care and elective care.

“To that end we are calling for all non-urgent elective care in public hospitals to be curtailed. Private hospitals must be now brought on the pitch to provide elective care until the end of March 2023 at the very least.

“We know that many nurses and midwives are signalling their intention to leave the profession or go abroad to work in safer conditions.

10,679 people were on trolleys in October. 393 of those were children, making it the worst month for paediatric overcrowding on record.

We’re in an overcrowding crisis. Public hospitals can’t cope with both emergency and elective care. Private capacity must be used urgently! pic.twitter.com/6Si0urWzqE

“Directors of nursing and midwifery in hospitals are telling us how incredibly difficult it is to recruit but also retain staff, particularly in large hospitals. We are now calling on the Government to deal with this unsafe, unacceptable and inhumane situation.

“We do not need more pronouncements of increasing bed capacity, which is a meaningless endeavour if you do not have the staff to ensure that these beds can be opened safely.

“The Department of Health and the Health Service Executive cannot afford to be passive.

“Between overcrowding and retention of nurses, the situation is worsening every day. Every possible measure that can be taken in the coming days and weeks must be taken.”