Pain still ‘very raw’ a month on from Creeslough tragedy 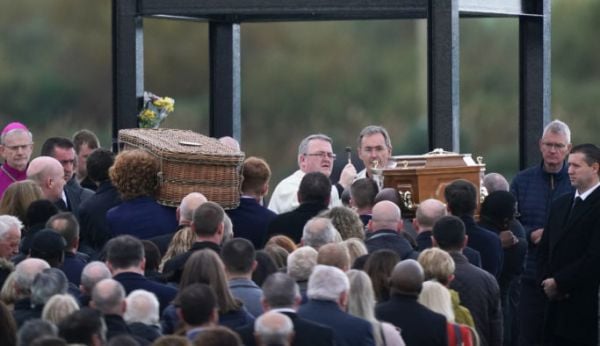 Politicians have paid tribute to the 10 victims of the Creeslough service station blast and the strength of their community a month on from the tragedy.

They also emphasised the continuing need for counselling supports, particularly ahead of the Christmas period, as the pain and grief was still “very raw”.

Speaking in the chamber on Tuesday afternoon, they also praised the work of the local clergy, the locals who tried to help those trapped in the blast rubble, and the first responders at the scene.

The moving speech of James O’Flaherty’s teenage son Hamish at his father’s funeral was also praised by politicians.

Minister for Agriculture and Donegal TD Charlie McConalogue said that the moment at 3.18pm on October 7 would be “etched into the souls of the people of Donegal for generations”.

He said: “Each of our emergency services working with local people were heroic in their efforts. They risked their own lives to save those in Creeslough.”

He also paid tribute to the cross-community response, as well as the digger driver who worked late into the night without taking a break to help with the recovery efforts.

He added: “When the Taoiseach Micheal Martin visited the site the day after the explosion, he was very much moved by how volunteers were so giving of their time as part of the search efforts as well as ensuring everyone at the site was looked after.”

He mentioned the Coffee Pod cafe that looked after people, as well as Father John Joe Duffy, who Mr McConalogue called “a tower of strength”.

He added: “Our thoughts at all times have never left those who have lost their loved ones and whose lives are irreparably changed and altered forever.”

He said that the Taoiseach wanted to praise the work of those at the coffee shop Coffee Pod in particular.

The road that the service station is located on remains closed, but Minister for Transport Eamon Ryan told the Dáil that they would do everything “to help restore that connectivity”.

Mr Ryan said also that he had attended mass at St Michael’s Church in Creeslough two weeks ago, when Father Duffy was absent due to contracting Covid-19.

Sinn Féin TD for Donegal Pearse Doherty said that a focus needed to be put on what the community in Creeslough needed.

He said: “The grief felt by their families in the community of Creeslough is the grief of this nation, and indeed, beyond its waves. Their loss is the loss for the nation.

“We also need to recognise that the physical hub of the community is destroyed, it lies in rubble.”

Labour leader and TD Ivana Bacik said that it was hoped that “answers would be forthcoming” to make some sense of the tragedy.

“The question of ‘what if’ may be in the back of our minds, and the one thing that may come out of any report and any investigation is that we might find recommendations that could be applied to prevent any such similar terrible event or incident reoccurring,” she said.

The incident is being treated as a tragic accident, with a gas leak believed to be one theory.

Former Gaeltacht minister and Fine Gael TD for Donegal Joe McHugh said he would like to remember the people who were still hurting over the “enormous loss, this enormous tragedy”.

He said: “It’s very very raw for the people who are still grieving. We’re in the middle of the month’s minds and I’m conscious this evening… that there are people who are in tremendous pain and are hurting for the loss of their loved ones, their neighbours, their relatives, their friends.”

Donegal TD Padraig Mac Lochlainn said that they had just reasons to criticise the actions Church in Ireland before, but that the way in which priests supported the locals in Creeslough was admirable.

Brid Smith said that she understands that a surge in demand for counselling services is expected in the lead up to Christmas, which she said was “perfectly understandable”.

She added: “Christmas is a time for family, for joy, and for togetherness, and it is going to be very, very tough on them.

“So I think all of our thoughts should be with the family and friends and indeed those who are injured and those who ended up in hospital or maybe still are in hospital.”

Emer Higgins told the Dáil that Creeslough is “an exceptionally strong community” and that while they grieve the loss of their loved ones, “they will learn to laugh and smile again”.

Independent Donegal TD Thomas Pringle said that he was disappointed that drop-in counselling services were scaled back at Creeslough, and that the weeks ahead will be difficult for those dealing with the “unspeakable” tragedy.

He said that some members of the community were struggling with sleeping in particular.

Mr Pringle also criticised junior minister Josepha Madigan for a tweet she sent soon after news of the tragedy emerged, which he said was “in such bad taste that it’s hard to understand”.

Ceann Comhairle Sean O Fearghail said that “a pall” of grief and sadness fell over the country after the tragedy, and noted the sincerity of the contributions by politicians.

He and members of the chamber then stood for a minute’s silence to remember “the victims and the heroes” of Creeslough, but also the victims of the 2015 Carrickmines fire, the 1981 Stardust nightclub fire, and the teenage girls killed in a Navan road crash in 2005, who were all mentioned during the tributes.